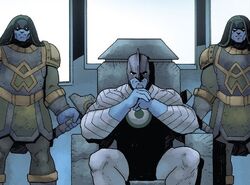 When Kree members of the Kree Army returned home to see that their beloved planet of Hala had been totally destroyed they became disillusioned by the Supreme Intelligence and his followers, such as Ronan, and sought to rebuild the great Kree society.[8] They sought to use the remaining Inhumans to turn them into the Super-Inhumans to use them against the Kree Empire, whom they called them the old Kree, in their Kree Civil War.[9][1] However, Black Bolt was unwilling to let his people to be used or murdered and so he destroyed the Imperium's stronghold where the Inhumans were held.[10]

The Imperium and the Utopian Kree eventually established a ceasefire by the new leader of the Imperium, Dorrek VIII,[5] after it was merged with the Skrull Empire to form the Alliance.[2][6]

Like this? Let us know!
Retrieved from "https://marvel.fandom.com/wiki/Kree_Imperium?oldid=5787980"
Community content is available under CC-BY-SA unless otherwise noted.