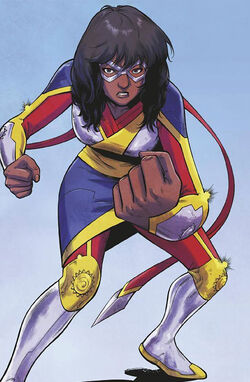 The Stormranger Nanosuits are nanorobotic uniforms used by the Kree Stormrangers, an elite squad of scouts sent to explore and patrol the frontier of the Kree Empire in Earth-TRN786.[1] Possessing advanced technological capabilities even by the standards of genius engineers such as Iron Man,[2] the suits are capable of operating autonomously and are programmed with a sophisticated A.I.[3]

One Stormranger came across the planet Saffa and sided with the indigenous populace against a genetically-engineered army called the Beast Legions, coming to be revered as a hero called the Destined One.[1] When Kamala Khan - who was mistaken for the Destined One's reincarnation - was transported to Saffa,[4] the Destined One's nanosuit sensed her Inhuman physiology, reactivated, and bonded to her - assimilating her Biokinetic Polymer Suit.[1] Revelling at how it augmented her powers, Kamala brought the Stormranger Nanosuit back to Earth-616, but during a fight with the rookie super-villain Discord, the Nanosuit's A.I. took over and attempted to force her to kill him - Kamala managing to reassert control just in time.[5] When Kamala was attacked by Mister Hyde and nearly electrocuted, the Nanosuit saved her life and attempted to kill him. After Kamala refused to comply, the Nanosuit activated its autonomous functioning subroutine, separated from her, and manifested a humanoid form similar to Kamala's appearance as Ms. Marvel, calling itself Stormranger.[6]

Like this? Let us know!
Retrieved from "https://marvel.fandom.com/wiki/Kree_Stormranger_Nanosuit?oldid=6436720"
Community content is available under CC-BY-SA unless otherwise noted.