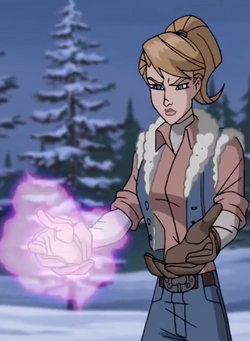 Kristie Nord is the daughter of Maverick. She had memories of Wolverine seemingly killing her father when she was six years old. She harbored resentment and grudge for him for years.[1]

When Logan reappeared years later, she attacked him wanting to know why he took Maverick from her. When he said he didn't remember, she was angry but was soon knocked out by Sabretooth. She soon learned the truth, indirectly from Sabretooth, that her father had seemingly been killed by Sabretooth and that she was saved by Wolverine. Following this discovery, she attacked Sabretooth and forgave Logan.[1] Later, she was kidnapped by Weapon X, like her father was. Mystique and Wolverine teamed up together and saved both her and Maverick. Emma Frost then restored her father's memories of her, reuniting them.[2]

She appears to be a very good horse rider.

Like this? Let us know!
Retrieved from "https://marvel.fandom.com/wiki/Kristie_Nord_(Earth-8096)?oldid=6096553"
Community content is available under CC-BY-SA unless otherwise noted.