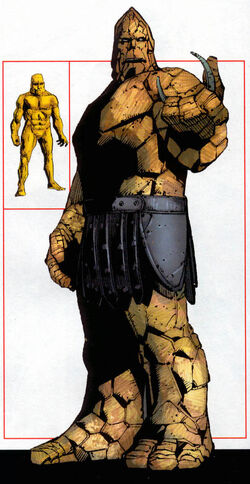 Around 3,000 BC, the Kronans attempted an invasion of Earth. Landing in ancient Babylon, they fought King Gilgamesh of Uruk, who vanquished them with the aid of a time-traveling Captain America.[1]

The Kronans established a base on one of Saturn's moons, hence the nickname Stone Men of Saturn. In modern times, the Kronans landed an immense invasion force in Norway. Sighted by Dr. Donald Blake, they pursued him into a cave, where Blake discovered the hammer of Thor. The Kronans went on to attack NATO forces, driving them off with an illusion of a dragon. When Thor came to fight them, they lowered a cage over him to capture him, but he smashed through. They aimed their disintegrators at him, but he smashed them with his hammer. Finally, they unleashed the Mechano Monster, but Thor destroyed it with a single blow. Terrified of Thor, the Kronans fled earth.[2]

One of the escaping Kronan vessels crashed into an asteroid and became stranded in space. When Thor, Sif, and the Warriors Three visited the site of their crash in their vessel the Star-Jammer, the Kronans attacked them in the hopes of stealing the Star-Jammer. Unable to match them in power, one of the Kronans removed the Gravitron from their ship and modified it into a weapon to fall Thor and his allies. However, Thor fought against the ray, and destroyed it. He then destroyed the Kronans' vessel, setting off a chain reaction which set about destroying the entire asteroid. The Star-Jammer lifted off the asteroid, abandoning the Kronans to their deaths.[3]

The Kronans were among the alien races which attempted to negotiate for the rights to Rick Jones' biography, "Sidekick." When they learned it did not reveal how he had tapped the Destiny Force during the Kree-Skrull War, they withdrew their bid.[4]

One of the Kronans, Zardok, served as a member of the Starblasters. In battle with heroes from earth, he was slain by Perun.[5][6]

A band of Kronans allied themselves with the New Immortals, and were sent by them to earth to oppose the High Evolutionary and his allies, the God Pack. They attacked the High Evolutionary's forces at Mount Wundagore, but found themselves again facing Thor. They unleashed their Mekkanoid against them, but it was destroyed by Anak. They also created another illusionary dragon, but it was dispelled by Luminor. The Kronans were all defeated, with one slain by Thor in battle. The others were taken prisoner by the High Evolutionary, who learned from them that the New Immortals were their masters.[7]

A number of Kronans, including Korg and Margus, became prisoners on the planet Sakaar, where they became gladiators. Margus and the other Kronans resisted their implants, and lost their minds. Korg wound up having to fight Margus and the others alongside his fellow gladiators the Hulk, Miek, Elloe, Lavin Skee, a Shadow, and a Brood. Korg recalled how he and Margus had been a part of the forces that fought Thor in Norway. He and the other gladiators became "warbound," pledging allegiance to each other. Korg continued to adventure with the Warbound as they broke free from the arenas and began to roam Sakaar, leading their own army, and eventually raising up an army against the Red King that overthrew him. Korg helped convince the Hulk that he should become the new ruler of Sakaar. The Hulk took Caiera as his queen, but when the vessel which brought him to Sakaar suddenly exploded, it slew most of the planet's population, Caiera included. The Warbound gathered the survivors, and the Hulk led them to Earth so that he could seek vengeance.[8]

On Earth-788 the Kronans would attempt to invade Earth much like they did on Earth-616. However in this reality, Donald Blake would be accompanied by Jane Foster on his vacation to Norway. It would be Jane who would find the walking stick and strike it against some rocks revealing it to be the Mjolnir and become Thordis, receiving Thor's powers. Using her newfound powers she would fight off the Kronans and send then into retreat, their attempt to invade Earth a complete failure[9]

In this universe Donald Blake was never transformed into Thor, because Hulkpool traveled back in time and defeated the Kronans that would have chased Blake into the cave were Mjolnir was hidden.

Kronans existed in the universe that was infested by the Marvel Zombies. Their history on Earth-91126 was similar to that of their Earth-616 counterparts. Like on Earth-616, the Kronan known as Korg was a member of the Hulk's Warbound headed to Earth to get revenge for the destruction of planet Sakaar. Korg was destroyed by a zombified Black Bolt.[10] The fate of the rest of the Kronan species remains unrevealed, however it's entirely likely that they were wiped or transformed by the universe spreading zombie virus.

In this universe, Kronans appear as an ally of the Marauders, participating in their attacks on Asgard and Vanaheim.[11]

Unlike the Kronans of Earth-616, the Kronans of Earth-TRN855 were atheists. Their battle with Thor would cause some members to have an experiential crisis. One of these agents went under geocloning, resulting in a colony of Kronans to form on Earth's outer crust. Unfortunately, these clones were devoured by Galacta.[12]

Known Powers: The Kronans' bodies are composed of a strong, silicon like substance, granting them protection against physical harm. Within an oxygen-based atmosphere, they possess enhanced strength. They can consume minerals such as coal or shale as food. They are a highly advanced race, having built vehicles capable of space travel, and designed robots such as the Mechano-Monster and Mekkanoid. Once, a Kronan made use of the Gravitron aboard his ship as a weapon. They also possess technology which can create illusions, such as that of a fire-breathing dragon.

Their Silicon bodies though dense can be destroyed with sufficient force.

Mountainous, with 27% surface covered with water

Like this? Let us know!
Retrieved from "https://marvel.fandom.com/wiki/Kronans?oldid=6927813"
Community content is available under CC-BY-SA unless otherwise noted.