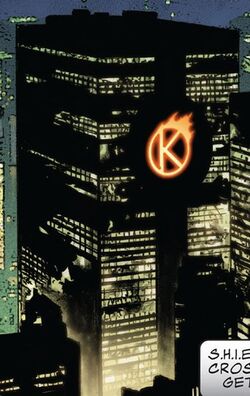 After the fall of the Soviet Union, former K.G.B. General Aleksander Lukin set about building a business organization to fund his shadowy efforts to destroy the United States, which he blamed for the downfall of his homeland. He named his new operation Kronas Corporation after his hometown in Russia,[5] and financed it by selling a cache of superhuman artifacts he had looted from the archives of the K.G.B.[6][3]

While Kronas was a successful venture in Russia, it gained global relevancy when Lukin, who was President[7] and Chief Executive Officer,[8] gained possession of the Cosmic Cube.[6] He used its reality-warping powers to exponentially increase the company's wealth, allowing it to perform a hostile takeovers of numerous other companies including American oil conglomerate Roxxon Energy Corporation. These new acquisitions afforded increased protection against prosecution in the United States.[3]

Upon acquiring the Roxxon Energy Corporation, Kronas Corporation then estabilished its american headquarters at the One Roxxon Plaza in Manhattan's Financial District,[3] dismantling the Roxxon Board of Directors and having Roxxon President Don Kaminski instead report directly to Lukin.[9] After a Red Skull-controlled Aleksander Lukin faked his death in a jet explosion,[8] Vladmir Morovin replaced him as C.E.O., although Morovin was later revealed to be an highly advanced hologram controlled by Lukin himself.[2] Following Lukin's actual death,[10] Roxxon started to secretly control its now leaderless parent company[11] until it was able to break free from Kronas' ownership, establishing an independent Roxxon Energy Corporation led by newly appointed Chief Executive Officer Dario Agger.[12]

After Aleksander Lukin was brought back from the dead by his wife, Alexa,[13] he contacted his long-time friend and Kronas executive, Leon, who reintroduced Lukinto the Board of Directors of the rebranded Kronos Corporation. It is possible that Lukin subsequently regained his role as President and Chief Executive Officer of the company.[4]

Like this? Let us know!
Retrieved from "https://marvel.fandom.com/wiki/Kronas_Corporation_(Earth-616)?oldid=5837868"
Community content is available under CC-BY-SA unless otherwise noted.