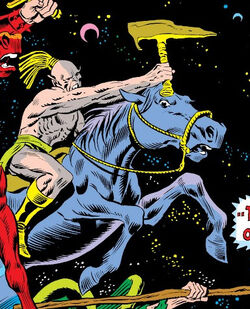 The Four Horsemen of the Apocalypse are members of the Axi-Tun race,[1] a race of beings from the planet Tun. They are Linbythoum, Yentron, Krowtanem, and Rowregyynac, known as War, Pestilence, Famine, and Death respectively.[2] They scoured the universe and became a scourge to all they encountered, earning them their biblical names. They sought to conquer the planet Earth at is was considered the nexus in a circle of other civilized worlds in the universe. When they attempted to conquer the Earth centuries ago, they initially found it easy pickings as it was populated by savage primitives. However, they were soon opposed by a race even more mightier than their own that defended the people of Earth and drive the Four Horsemen from the planet. They fled back to Tun, where their defeat was seen as weakness and they were exiled from their homeworld.

Seeking to regain favor from their people, the Four Horsemen returned to conquer Earth in the modern age when they were convinced that the beings that defeated them in the past had left the Earth. Upon their arrival, Pestilence unleashed a plague that caused the entire population of Manhattan to go into a deep sleep for 48 hours. When the citizens awoke their city was under siege by rodents, disease, and strange creatures. While the city panicked the Fantastic Four came to the aid of New Yorkers and clashed with Pestilence directly. When the Thing resisted the debilitating disease that Pestilence was unleashing upon him, he caused the alien to vanish with a single blow. The FF's leader Mister Fantastic then deduced that the beings that defeated the Four Horsemen in the past had set up devices to banish them from Earth provided they were opposed. Reed then split up the team to tackle the other members of the Four Horsemen.

The Human Torch and Medusa went to Africa where they found that War was escalating a combat zone by providing weapons to both sides of the conflict. Johnny and Medusa stopped the warring sides and clashed with War, defeating him in combat. But before he vanished, War removed his mask showing all gathered the real face of war: themselves. In Cambodia, Mister Fantastic and the Thing clashed with Famine, who was making the people of the country starve even though there was an abundance of food. After forcing the people to eat bowls of rice, Reed smothered Famine with his own body, until their foe vanished as well. The group reunited and traveled to Mount Everest where they found Death. He created death constructs of each member of the Fantastic Four. Realizing that fighting their own death images would be lethal, the FF switched opponents, destroying these horrifying death parodies of themselves. Medusa then threw the Thing into Death's body, striking another victory for the heroes as Death was banished from the Earth as well.[3]

As Famine, Krowtanem had the ability to cause others to starve, he could mentally condition them into being incapable of recognizing food as a form of torture while starving his victims.

Like this? Let us know!
Retrieved from "https://marvel.fandom.com/wiki/Krowtanem_(Earth-616)?oldid=5728803"
Community content is available under CC-BY-SA unless otherwise noted.