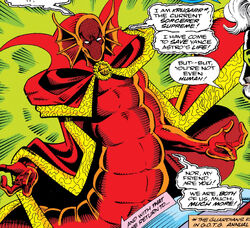 Krugarr is a Lem, a race of extremely long-lived wormlike creatures. It is unknown exactly how old Krugarr is. Sometime in the 22nd century, Doctor Stephen Strange found him on Lem. Krugarr agreed to become his apprentice and learn the ways of magic. Krugarr succeeded Strange as Sorcerer Supreme, with Strange now calling himself the Ancient One like his own master was previously.[1]

Krugarr accepted the Inhuman Talon as his apprentice, but Talon was rejected after not taking his training seriously.[2]

Dormammu murdered The Ancient One (Doctor Strange), but was eventually defeated by the Guardians, Krugarr, the new Sorcerer Supreme, and his disciple Talon.[3]

He and Talon seemed to reconcile and Talon resumed his studies on Lem.[4]

Krugarr can use a great many magical spells such as mystic bolts, flight, astral projection, and calling upon various entities

Eye of Agamotto, Cloak of Levitation

Like this? Let us know!
Retrieved from "https://marvel.fandom.com/wiki/Krugarr_(Earth-691)?oldid=5533110"
Community content is available under CC-BY-SA unless otherwise noted.