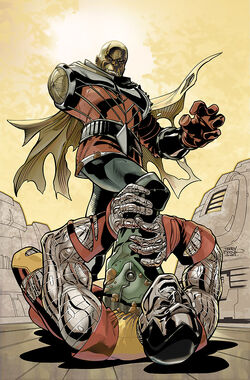 Powerlord Kruun was the overall tyrant of Breakworld, who ordered to intercept and destroy the S.W.O.R.D. spaceship where Colossus was located.[1]

When the soldiers landed, he ordered to capture and interrogate them, while he would talk to Danger.[2]

She said she could kill the X-Men and that they had that common goal, so he finally agreed because the weapon aimed at Earth needed to be protected.[3]

When he learned that Danger betrayed them and Colossus was seen with Aghanne, he spied the X-Men, who were heading in a spaceship towards the moon-based weapon.[4]

Thinking they had a secret plan called 'Leviathan', he ordered to blast the shuttle upon which Cyclops escaped; after the mutant died, he brought him back to life to interrogate him about Leviathan.[5]

He was then defeated by Cyclops' optic rays and held prisoner in his own fortress, until he was freed by Ord.[6]

He was eventually maimed by Wolverine and dethroned by Colossus,[7]

Like this? Let us know!
Retrieved from "https://marvel.fandom.com/wiki/Kruun_(Earth-616)?oldid=5734250"
Community content is available under CC-BY-SA unless otherwise noted.