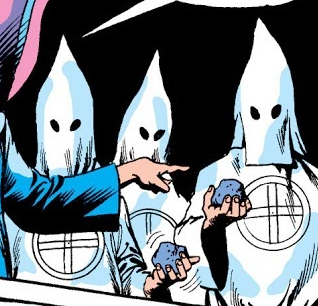 The Ku Klux Klan are a racist organization operating mostly in the American South, taking its name from the greek word for circle. After the American Civil War, their enforcer Soul-Strangler terrrorized former slaves into not voting. They lynched one of Monica Lynne's ancestors, Caleb, who refused.[1]

In modern times, the Klan clashed with the Black Panther on several occasions, the first time when he visited Georgia to investigate the death of Monica Lynne's sister Angela.[2] They managed to capture the Black Panther[3] and tied him to a burning cross, but he managed to free himself and then confronted their local leader at a public meeting.[4]

Retrieved from "https://marvel.fandom.com/wiki/Ku_Klux_Klan_(Earth-616)?oldid=4884080"
Community content is available under CC-BY-SA unless otherwise noted.