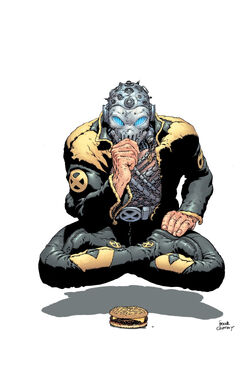 I will not be judged by children. Give me death. Make me immortal.

Kuan-Yin Xorn's mutant power manifested causing his normal head to be burned away by a tiny star. His twin brother Shen Xorn manifested similar powers. He was able to use these abilities in many ways, but was kept isolated given the dangerous nature of his powers. Even his twin brother had little contact with him, as he was kept in a similar prison as Kuan-Yin. Both of them wore masks of iron that safeguarded others from the effects of their powers.[2]

Kuan-Yin's warden sold him to John Sublime who wanted to harvest his mutant brain. In an effort to escape such fate, Kuan-Yin attempted suicide by reversing the power of his star. But Cyclops convinced him to escape that fate and join the staff at the Xavier Institute.[2]

Before joining the X-Men, Kuan-Yin felt he needed some time to meditate and enjoy his freedom. After a couple of weeks, Cyclops found him where he had just healed a bird that was dying and told him about the threat Cassandra Nova posed to mutantkind. He joined Cyclops, but was quickly attacked by a brainwashed Lilandra and her Shi'ar Imperial Guard. Xorn and Cyclops escaped together, and Xorn played a vital role in stopping Cassandra Nova and the Shi'ar threat to the students and the X-Men. Afterwards, he saw the Nano-Sentinels that were poisoning the X-Men, who had all been infected by Cassandra at an earlier point, he healed all of them as well as Xavier's spine.[4]

After trying to help a mutated boy in Mutant Town, Xorn felt that he would do a much better job as a teacher, rather than as an active team member.[5] Xavier made for him a class called the Special Class for mutants, who just like him, had been mentally abused because of their mutation. Despite some of the class mates taking time to respect him, they all did at certain points as he was a good teacher. He also wanted Carter to join his special class due to his powerful mutant powers, but his discussion about it with Carter's mother, Annie quickly changed subject because he thought of Annie as a racist, something she tried to deny but found it hard to do.

Soon after the creation of the Special Class, Esme Cuckoo, a creation of Weapon Plus, was dealing out Kick to the students of the Institute. Kick featured the essence of Sublime, who was planning on taking control of mutants in hopes of creating more mutant hysteria and therefore being easier for him and the Weapon Plus facility, to wipe them all out. After the possessed Quentin Quire failed to destroy Xavier's dream with his riot,[6] Esme mysteriously got Xorn addicted. After the riot at the Xavier Institute, Xorn slowly began to push Magneto's ideals over Xavier's in his teachings. After being confronted, he revealed himself as Magneto, claiming he had survived Cassandra Nova's Sentinel attack on Genosha. Recruiting his Special Class into a new Brotherhood, he then led a desperate attack on New York City after sending most of the city's heroes looking for 'black hole bombs' outside city limits and preventing their return with his powers.[7]

His followers and the X-Men were suspicious of his being the real Magneto. He had become addicted to Kick and seemed to be a bitter, angry relic rather than the confident leader on Genosha. His threats to 'prove' he was the real Magneto were not taken seriously. His last act was to kill Jean Grey-Summers with a massive stroke. He said he 'would not be judged by children', put on his helmet and asked to be made a martyr. An enraged Wolverine slashed at his head as Jean lay dying, decapitating him.[8]

To many, it was a mere mystery what Xorn or Magneto was trying to do. On the surface it looked like Magneto, addicted to some mutant drug, was trying to avenge everyone that died in Genosha and that humans needed to be eradicated, and that the X-Men needed to be punished for even wanting peaceful co-existence. But in reality, it was Sublime making Xorn use the face of Mutant terror and destroying and murdering as much as possible, so when the time came, it would be easy to convince the world that mutants needed to be dealt with, before they destroyed the rest of the world. Sublime's plan worked in creating more hysteria, after the events, mutants were more hated and feared then ever before.

Xavier and Wolverine brought Xorn's body to Genosha to hold a funeral where many of the people gathered there thought it was still Magneto. After most had left Xavier alone with the body, Xavier brought it and most of the supplies he had to Magneto's abandoned house, where Magneto came out of the shadows, helping Xavier to figure out what drove Xorn to madness. Magneto was enraged when he found out that most people actually believed that Xorn was him and to think that he could cause such destruction on innocent civilians.

However this was not the end for Kuan-Yin Xorn. Xorn's power and his connection with Sublime had left his 'presence' to still be alive somehow. When Shen Xorn visited the Xavier Institute, he felt his presence and mentioned it as the traitor that took over his brother. He also mentioned that he had been here for "a long time", revealing that Sublime had been at the Xavier Institute for some time, planning the right attack. When Carter Ghazikhanian left with his mother Annie, a shadowy figure (refered to as a woman) was there with him, seemingly controlling him on some level. This might have been the Sublime/Xorn merger, leaving the Institute with Carter and Annie, though this was not proven as of yet.

Xorn under control of Sublime did emerge again after the M-Day, where most mutants on Earth lost their powers. A mass of energy was found orbiting Earth. This energy mass was later revealed to be all the energies from mutants who lost their powers. The mass targeted a mutant named Michael Pointer, who's mutant power was to absorb different mutant energies. Dubbed the Collective, he set out on a rampage, murdering Alpha Flight and attacking the New Avengers. Finally arriving on Genosha, the Collective attacked Magneto and revealed himself to be Xorn. The Collective tried to transfer his power onto Magneto while claiming that when he took his name to help the mutants to victory over humans, it didn't work and that he needed Magneto himself to be a part of it. These efforts were dismantled by the New Avengers, and the energies were thrown into the Sun by Sentry.

Because of his past actions, Xorn's soul was sent to Hell, and after the criminal organization known as The Red Right Hand sent Wolverine's soul to Hell, Xorn was sent by Satan to fight against him alongside several villains killed by Wolverine through the years.[9]

Along with Shen, who had also died at a later point, Xorn was presumably returned to life by the The Five, a group of mutants capable of combining their powers into a process of resurrection, brought together by Charles Xavier as part of his plans for mutant ascension. The two brothers remained in the mutant-nation of Krakoa, founded by Xavier and his allies.[10]

Xorn was a mutant possessing a miniature star in his brain. This granted him several powers, including:

Like this? Let us know!
Retrieved from "https://marvel.fandom.com/wiki/Kuan-Yin_Xorn_(Earth-616)?oldid=6466072"
Community content is available under CC-BY-SA unless otherwise noted.