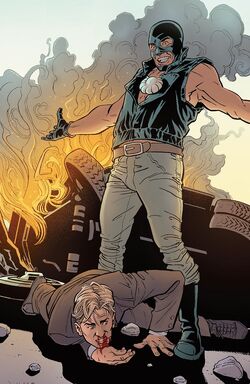 Pardon me. Do you always demonstrate for peace by grabbing other people's property and kicking them in the face?

Kurt Gerhardt reached a state of homicidal despair after the random murder of his father, a divorce, the loss of his bank job (part of the savings and loan crisis), and being brutally robbed at his new job in a fast-food restaurant.[1]

Greg Salinger, the Foolkiller, is noted by popular talk show host, Runyan Moody, who browbeats his way into an interview with Salinger. Gerhardt sees this and via Salinger's secret use of the modem in his therapist's computer, they set up a correspondence.[citation needed]

Salinger directs Gerhardt to an old confidant who provides him with the Foolkiller costume and "purification gun". He eventually abandoned the gaudy costume, substituting a simple leather mask and vest (or appearing in a variety of disguises), and created a simpler calling card: "Foolkiller / e pluribus unum / Actions have consequences."[citation needed]

Initially, Gerhardt directed his vigilante campaign at violent criminals, garnering some praise from the public, but his anger at abuse and neglect in general led him to kill drug-addicted negligent mothers and even their (albeit violent) children in a series of escalating massacres. His ever broader definition of "fools" who deserved death broadened to include those guilty of what Gerhardt believed to be rank hypocrisy or stupidity.[citation needed]

At Burger Clown, Gerhardt he develops a promising romantic relationship with a fellow coworker, Linda Klein. He becomes a popular man in his neighborhood. Acting heroically, even without the gun, Gerhardt saves an acquantice from being run down by a drunk. Gerhardt, however, must be stopped from beating on the driver.[citation needed]

In a move celebrated by his friends at the restaurant, he gains a job at a credit agency. His work-neighbor is a crass, older man who enjoys using his power for thrills and cheap revenge. In a moment of weakness, Gerhardt even considers using his gun on this man, along with others who are guilty of only being annoying. This includes the new man in Linda Klein's life.[citation needed]

Gerhardt was especially frustrated at the public's thoughtless pursuit of instant or momentary gratification and this became the centralizing theme of his killing spree. His ever-increasing kills become more violent, taking place in front of, and traumatizing, many innocent people. Once such incident is viewed by his love interest. He even goes after 'foolish' celebrities. His final major kill was an industrialist who was stripping Amazon rain forest land to raise cattle for beef and this turned the public hostile towards the Foolkiller.[citation needed]

After escaping the police, his online communications with Salinger having been discovered, and failing to kill his drug-lord nemesis, Gerhardt had his face altered with the assistance of his predecessor's friend. She carefully uses acid to mark his face. He leaves New York to assume a new identity in Arizona.[2]

Prisoner in the Raft

At some point, Gerhardt was captured and lock into the Raft, although the circumstances surrounding his capture have not been revealed. After Electro organizes a massive breakout who cause the formation of the New Avengers. He was seen attacking Spider-Man with many other villains, after which he escaped.[3] He was subsequently recruited into the Hood's Gang. [4]

More recently, he was a patient in the english prison of Crossmore, now a psychatric hospital, and seems to have feelings for the unit administrator, Ellen Whitby, and was angered at Deadpool for him to talk to her, during the Merc with a Mouth's stay there. When this one was release from his cell to the open-space of the unit, Kurt was beat up alongside the others patients, and was disfigured.[5] His demand of release was authorized by the Parole Board, but he was reluctant to leave, being in love with the Doctor Whitby.[6] After having created a riot to kill Deadpool, he was made released by the Warden Aimes, unbeknownst that Wade had somehow replaced him, and he was actually permanently restrained into solitary containment unit in the highest security housing area of Crossmore.[7]

Like this? Let us know!
Retrieved from "https://marvel.fandom.com/wiki/Kurt_Gerhardt_(Earth-616)?oldid=6476694"
Community content is available under CC-BY-SA unless otherwise noted.