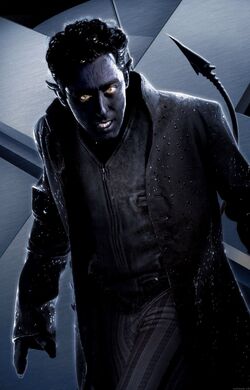 Nightcrawler is a mutant from Germany, where he performed in the circus. He has the ability to teleport. He decorated his blue skin with "angelic symbols" which reflected his faith and devout practice of Catholicism. This form of artistic body modification was self-inflicted brands or scars: "One for every sin".

Nightcrawler was brainwashed with a fluid produced by William Stryker's mutant son in order to attempt an assassination on the President of the United States. He was nearly successful, however, he was wounded and snapped out of the the trance in the final moments.

Storm and Jean Grey were sent to find Kurt. Wagner left with them and developed a friendship with Storm. At the Alkali Lake facility he was key in helping Storm save the mutant students Stryker had kidnapped and helped stop Stryker's Cerebro from killing anyone.[1]

Nightcrawler continued to be an X-Man after this, but later told Wolverine that he was going to leave the team because life as a X-Man was too violent for him. Wolverine accepted his decision.[2]

Seemingly those of Kurt Wagner of Earth-616.

Seemingly those of Kurt Wagner of Earth-616.

Like this? Let us know!
Retrieved from "https://marvel.fandom.com/wiki/Kurt_Wagner_(Earth-10005)?oldid=6100830"
Community content is available under CC-BY-SA unless otherwise noted.