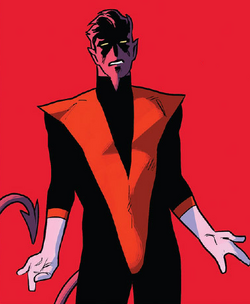 This world's Nightcrawler's life mirrors that of his mainstream counterpart up until the point when Jennifer Walters came to the Jean Grey School for Higher Learning to read the last will and testament of Charles Xavier which revealed the existence of the omega-level mutant Matthew Malloy.

Kurt and the rest of the X-Men were present, but She-Hulk could not read the will as it required for all members to be there which included their former leader Cyclops.

With Beast being the only one who knew where Cyclops was, Storm took him, Wolverine and Iceman in the Blackbird to Canada while Nightcrawler stayed behind with Firestar.[1]

After Scott arrived with his team, they listened to a holographic message left by Professor X instructing them to carry out his last wish, to make sure Matthew Malloy was still under control. Thinking that Charles was being a hypocrite, caused friction between him and Iceman.

As they assembled a small team to intercept Matthew in South Carolina, Kurt stood at Firestar's side as she tried to comfort Bobby about Xavier's death, but he was to mad to listen and took off on his ice slide.[2]

Nightcrawler was last seen in a memory of Cyclops' when Matthew telepathically probed his mind and caught a glimpse of all the members that Xavier has ever assembled as X-Men.[3]

Like this? Let us know!
Retrieved from "https://marvel.fandom.com/wiki/Kurt_Wagner_(Earth-14923)?oldid=5521296"
Community content is available under CC-BY-SA unless otherwise noted.