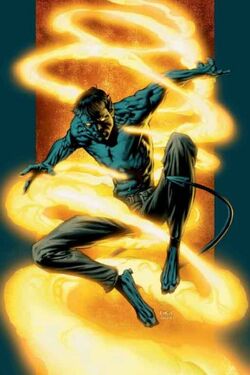 Growing up in the Bavarian mountains, Kurt Wagner was a member of a traveling circus who was kidnapped as a German captive of the Weapon X project as an early teen, and was, like Rogue and Wolverine, forced to become one of their mutant agents through brutal training regiments. However inhumane their treatment of him, Kurt refused to forget his idealism and faith. He even managed to convince Storm not to take vengeance against the Weapon X commander, John Wraith. Killing Wraith, he said, would bring her to Wraith's level and he refused to allow that to happen.[7]

Freed from Weapon X, Kurt returned to his home, but soon decided to join the X-Men when they needed help against Magneto and began attending Xavier's school. [8]

A friendly, humorous young man with a zest for high adventure, Kurt was well-liked among his teammates. He somewhat bonded with Angel, who was the only other X-Man besides himself who couldn't hide his mutation, and together they "misused" the Danger Room for "Pirates of the Caribbean-like" "role-playing" sessions.[2]

Kurt became interested in teammate and friend Alison Blaire. He was saddened by the fact that Warren, too, was interested in Dazzler. Indeed, Dazzler and Angel soon became a couple, leaving Kurt one of the only X-Men without a significant other.[9]

Kurt also befriended Colossus and the two spent much of their time together. Eventually, Piotr came out, explaining that he was gay. Disgusted by Piotr's sexual orientation, Kurt saw his former friendship as dead.[10] Kurt's mental state deteriorated due to his loneliness among the group to the point where he kidnapped Dazzler in an effort to manipulate her into loving him. The X-men defeated Nightcrawler and he was placed in an extended coma so that Xavier could telepathically work on rehabilitating him.[1]

Kurt later reversed his stance on Piotr, saying that it was unfair, due to the fact that Colossus had treated him as a brother and apologized. He even joined Colossus' "X-Men" team comprised of Dazzler, Rogue, Angel and himself, all under the influence of the drug Banshee.[11]

While walking down the New York City streets to a theater, Kurt was killed by Magneto's Ultimatum wave, which also killed many of the X-Men along with him.[12]

Nightcrawler was a mutant whose mutation granted him a demon-like physiology which granted him the following abilities:

Under the influence of the Banshee Drug, Nightcrawler was able to launch flare-like bolts which could teleport objects at a distance in addition being able to teleport greater distances similar to Blink.

Nightcrawler possessed above average strength of a man of his age, height, and build who engaged in intensive regular exercise.

Like this? Let us know!
Retrieved from "https://marvel.fandom.com/wiki/Kurt_Wagner_(Earth-1610)?oldid=6401875"
Community content is available under CC-BY-SA unless otherwise noted.