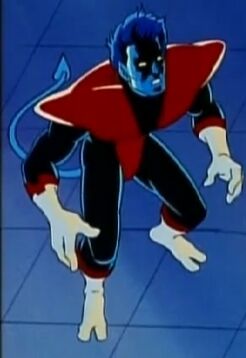 Nightcrawler was a a monk living in a Swiss abbey, persecuted by his superior and the townspeople who believed him to be a demon. Gambit, Rogue, and Wolverine helped him through his trials.[1]

Later, he was sent a letter by his birth mother that she was going to be harmed if he did not meet with her captor. He decided to get help from the X-Men. Wolverine, Rogue, and Jubilee were around to help. At the dam where he was suppose to meet up with his mother, he discovered she was the mutant criminal Mystique. His mother told him that she adopted Rogue but before that she had two sons, one of them was him and the other was the one who organized the whole thing: Graydon Creed. Creed wanted to destroy them to prove himself to the Friends of Humanity. Kurt asked Mystique to give him answers and she did, she told him about his birth and when she abandoned him and coldly said she didn't want him, although Kurt said he would pray for her and for god to forgive her.[2]

Like this? Let us know!
Retrieved from "https://marvel.fandom.com/wiki/Kurt_Wagner_(Earth-92131)?oldid=6120250"
Community content is available under CC-BY-SA unless otherwise noted.