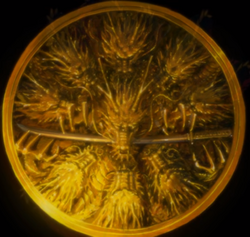 The Kuzuryu is a Japanese criminal organization. Named after the mythical 9-headed dragon, they were the most viscious and biggest clan within the Yakuza. Their leader was Shingen Harada. The clan had close bonds with A.I.M.. A.I.M. gave the Kuzuryu most of their weapons and tools, and in return the Kuzuryu let A.I.M. use their connections to distribute money and weapons throughout Asia.

Logan came into conflict with Kuzuryu when he learned that his girlfriend, Mariko, Shingen's daughter, was about to be married to Hidekai Kurohagi; a marriage that would give the Kuzuryu another base in Madripoor.[1]

Various weapons, including those provided by A.I.M.

Like this? Let us know!
Retrieved from "https://marvel.fandom.com/wiki/Kuzuryu_(Earth-101001)?oldid=6164238"
Community content is available under CC-BY-SA unless otherwise noted.