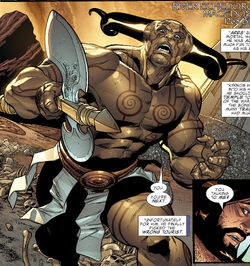 Kyknos was the son of Ares, Greek God of war, and a mortal woman. He decided to build a temple to his father, but during this effort he was killed by Hercules, thus sparking Ares' long-standing rivalry with the Prince of Power.[3]

Kyknos went to Hades when he died, and remained there for thousands of years. When Hercules journeyed to the underworld to recover Zeus, Kyknos was part of the jury that Hercules had to beat to free him.[4]

During Norman Osborn's period in power, Hera came to Hades and recruited Kyknos to be her new god of war. In exchange, all he had to do was kill his father. Kyknos agreed, but was killed by his father.[5]

Olympian/Human Hybrid Physiology: Kyknos is a demigod and possesses several characteristics that set him apart from normal humans.

Expert Combatant: Kyknos has been trained in armed combat with ancient Greek weapons like spears, swords and double-edged axes.[7]

Like this? Let us know!
Retrieved from "https://marvel.fandom.com/wiki/Kyknos_(Earth-616)?oldid=5428400"
Community content is available under CC-BY-SA unless otherwise noted.