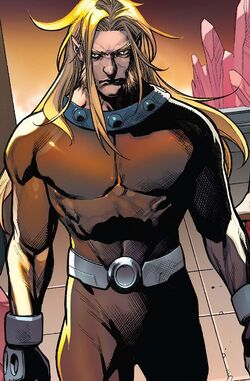 There's only room for one at the top of the food chain...and Romulus? He's getting too old for this. It's time to name a successor--but first, they have to prove, they're worthy. By killin' off all the others.

When Kyle Gibney's mutant powers began to emerge at an early age, he was left with a freakish appearance. Horrified, his parents kicked him out of his home, and he was left wandering the streets. Eventually found by the subversive organization, the Secret Empire, Gibney was experimented upon in their attempts to create a perfect killing machine. As a part of the experiment, Gibney was injected with DNA from the assassin Wyre, which left Gibney near-mindless, animalistic, and uncontrollable. Wyre later rebelled and destroyed the Secret Empire's headquarters.

Gibney was found by agents of the Canadian government and given over to Department H, then headed by James Hudson as a sanctioned program for developing Canada's superhero teams. Hudson placed Gibney in the entry-level Gamma Flight with the code-name Wild Child. (Like all recruits, those who developed their powers sufficiently would be placed in the premiere team, Alpha Flight.) During his training, Wild Child was mentored by Wolverine until he left to join the X-Men.

Unfortunately, the government disbanded the Department H program and, by extension, its hero teams.[4] Gibney's subsequent activities remain unrevealed until Delphine Courtney and Jerry Jaxon recruited him for Omega Flight. Jaxon hoped to destroy Hudson and his Alpha Flight, which had reassembled as a private team, but Omega Flight was captured by Alpha Flight and its members imprisoned.[5] Gibney managed to break out only once, and in his rampage, began killing indiscriminately. Nearly killing Heather Hudson, it took Wolverine to hunt him down and capture him again.[6]

Kyle soon found himself slipping into his bestial nature more and more often. One time in particular, he savagely went on another rampage, in the process attacking his teammate Pathway. Gamma Flight's former leader, Nemesis, teleported Kyle away to an unknown location, professing to have a solution.[8] He reappeared months later as Weapon Omega, mysteriously cured of his animalistic rages and possessing a handsome appearance. He helped Alpha Flight on numerous occasions, soon joining their team once more.[9]

To further disassociate from his past, Kyle took a new code-name, Wildheart.[2] During this time, Gibney and his teammate Aurora fell in love and began a relationship. However, Kyle eventually began to mutate back to his ugly appearance. Since he could not stand to be seen that way by his lover, he left, unaware that his sudden departure would cause Aurora's fragile psyche to deteriorate even further.[10]

Kyle Gibney, now calling himself Wild Child once more, accepted an offer to join the United States' sanctioned mutant team, X-Factor. This caused a bit of friction between Gibney and X-Factor's associate, Sabretooth, who was impressed into service. Eventually, however, Gibney's body began mutating even further, and he quit the team to explore his new mutations and to find his true self.[11]

Somehow, Kyle ended up in custody of the new Weapon X program, under the auspices of the mysterious Director, who hoped to use the program's mutants for the benefit of humankind, even if that meant performing deadly missions and interning mutant captives. The program’s scientist experimented on Kyle, who became more intelligent but more feral-looking, and was once again dubbed Wild Child. The Director found that Gibney had been twisted so many times that he no longer held an identity of his own, needing only minimal suggestions via conventional methods to follow orders like a machine or an animal.[citation needed]

One of Gibney's initial assignments was to recruit mutants for the Weapon X program. On one particular mission, to recruit Sunfire, Kyle's teammate Sabretooth became annoyed with him, lashing out and severing Gibney's vocal cords, rendering him mute. Another assignment was to recruit Kyle's one-time lover, Aurora. (In fact, this assignment was one of the reasons the Director of the program wanted Kyle in the first place.) Wild Child successfully freed Aurora from the mental asylum she was assigned, but, unfortunately, after Aurora was believed cured of her mental condition, she rejected Gibney due to his new freakish appearance.[citation needed]

Wild Child continued to serve in Weapon X, even to the point of capturing innocent mutants to be interned at the camp Neverland. In watching Aurora, who was becoming increasingly romantic with the Director, Malcolm Colcord, Gibney was persuaded to join agent Brent Jackson who was hoping to form a group to stage a coup with the Director. Gibney agreed, and Jackson's allies joined the team Underground, led by Cable who hoped to take down the Weapon X program. The Underground was able to infiltrate the Weapon X complex, ousting the Director and nearly crippling the program. However, before the final defeat, agent Jackson betrayed the Underground, turning Cable's psychic powers against his allies. Jackson captured the Underground members and altered their memories to erase everything they saw and learned about the program. Jackson took credit for saving the program and was named the new Director of the Weapon X program.[12]

After reality was twisted by the Scarlet Witch, many of Earth’s mutants were stripped of their powers. Wild Child was believed to have been among these, as his mutant energy signature was recognized as having been absorbed by the Collective.[13] However, he reappeared not only with his powers, but with a noticeable enhancement to them. His appearance also reverted more to resemble his original form, only he had numerous piercings in his ears, eyebrows, and face. He claimed to be working for the mysterious figure claiming to have guided Wolverine for his entire life, Romulus.[14]

Wild Child appeared once more in conflict with Wolverine aiding Omega Red and attempting to kill Logan. He was doing so under the order of the enigmatic Romulus. His plan consisted of dropping Logan into molten steel, however he was interrupted by Omega Red. While Wild Child and Omega Red battled each other, Logan managed to flee. A distracted Wild Child was consequently thrown into the molten steel by Omega Red after having his chest punctured.[15]

Sometime later Kyle was mysterious reborn again, being seen attending a party in Japan being thrown in Sabretooth's honor after ascending in the criminal circuit. He was subsequently beaten down by a wayward Logan whom had intruded on the latter's party and disappeared for a time afterward.[16]

Following the foundation of a mutant state in Krakoa by the hand of Charles Xavier and his allies, Kyle resurfaced as a citizen of the nation.[17]

After Kyle became acclimated to Krakoa. He would be tended to and medicated by Dr. Reyes and Sage using old Department H pharmaceutical treatments, because his feral mutation became problematic for him being amongst the other Krakoans. Due to his mutation, he would always seek out an alpha to follow and if he could find it, he would attack them to see if they are worthy to be "pack leader", and until he found a worthy one, he would act feral and attack anyone he deemed either fit or unfit. Kyle pretended to sleep and to swallow his meds for the entirety of his stay, attacking both Dr. Reyes and Sage once they got close enough.

Due to this, Kyle was assigned by the Quiet Council to Mister Sinister's team of Hellions; composed of mutants who were too violent or troubled due to their mutation, led by Psylocke (Kwannon).

Their first mission led them to taking down the State Home For Foundlings in Omaha, Nebraska, which was a cover for Sinister's still active Marauders cloning farm.[17] When Kyle and the Hellions arrived, they were confronted by and battled the Goblin Queen and her perverse Marauders, whom she had been magically torturing. After a swift defeat, most of the Hellions were captured, except for Kyle and Psylocke, who he had the urge to attack after believing she was faulting as the alpha. After his quick defeat and Psylocke cleansing his mind of his feral nature (for the moment), Kyle returned to his more civilized self, speaking in coherent and complete sentences.[18].

After Madelyne Pryor was shot dead by John Greycrow, Havok blew up the clone farm in anger, with Kyle and the Hellions escaping safely outside. After returning to Krakoa, Kyle was seen following Psylocke around, having accepted her as his alpha.[19]

He was later killed by the Locus Vile while on a mission with the Hellions to Arakko,[20] and was resurrected by the Five. As a result of dying in the dimension of Amenth he came back with stronger abilities and a drastically different personality.[21]

Wild Child's mutation resulted in an animal-like physiology granting him a number of superhuman attributes, many of which are enhanced to levels greater than he possessed prior to his being depowered. After dying in Amenth and resurrected by The Five, his powers and skills have been enhanced.


Regenerative Healing Factor: Wild Child's primary mutant power is an accelerated healing factor that allows him to regenerate damaged and destroyed bodily tissues much faster and more extensively than an ordinary human. Prior to his being depowered, Wild Child could heal from severe slashes and puncture wounds within a matter of hours. He was, however, unable to regenerate his vocal chords after having them severed during a brief scuffle with Sabretooth. However, Wild Child's accelerated healing powers have been restored and possibly increased to higher levels as he now has the ability to speak. Wild Child's healing powers extend to his body's immune system and render him immune to most diseases and toxins. The unique regenerative qualities of Wild Child's healing factor cause him to age at a pace much slower than an ordinary human.

Zoopathy: Kyle has a limited form of zoopathy, the psionic ability to communicate with and control animals. His zoopathy only works on wolves.

Mind Control Immunity: Kyle is completely immune to mind control, of course, his excuse for it is, in his words, "I don't have enough of a mind to control". [citation needed]

Wild Child is an excellent and experienced hand to hand combatant, having received training from the likes of Wolverine.

Like this? Let us know!
Retrieved from "https://marvel.fandom.com/wiki/Kyle_Gibney_(Earth-616)?oldid=6488237"
Community content is available under CC-BY-SA unless otherwise noted.