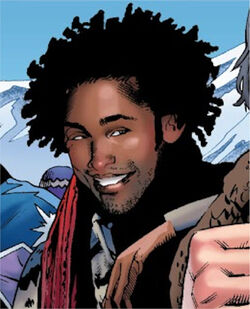 Kyle has been a trusted friend of Jeanne-Marie Beaubier for ages. Eventually, she asked him to become the manager of Team Northstar Extreme Snowsports in hopes of keeping her brother, Northstar, out of trouble, only to find out he would someday be her brother-in-law.[2]

Since they started dating, Kyle has continued to manage Jean-Paul's brand and coordinate shows, audio-visual and personal relations. When Wolverine invited Northstar to join the X-Men and relocate to San Francisco, Kyle was supportive.[3]

Northstar's flight and superspeed powers didn't make his long distance relationship with Kyle any easier. And after an overwhelming visit to Utopia, Kyle and Jean-Paul had to discuss the fact the Kyle could never become a part of the superhero world. Thankfully, the couple decided they each had to make some compromises and meet each other on common ground.[2]

After Kyle was kidnapped by the reborn Marauders, Northstar and the other X-Men liberated him. After this adventure, Northstar asked Kyle to marry him.

He later moved to Krakoa with Northstar.[4]

Kyle is an accomplished businessman and press manager, running Northstar Extreme Snowsports for a number of years. He also speaks French and Chinese.

Like this? Let us know!
Retrieved from "https://marvel.fandom.com/wiki/Kyle_Jinadu_(Earth-616)?oldid=6090217"
Community content is available under CC-BY-SA unless otherwise noted.