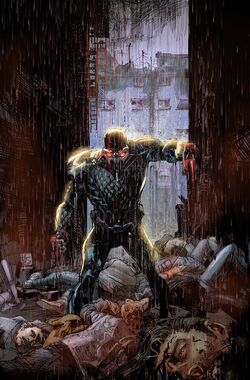 Not much is known about the past life of Kyle Richmond of Earth-31916. When he was a child his parents, Titus and Rosalie, were killed before his eyes, viciously gunned down in a racially motivated drive-by shooting. What stuck with Kyle that tragic night was his father's explaining to him the nature of the night hawk just moments before his murder.[2] He turned his father's investments into a thriving corporation and used his wealth to create a bulletproof costume and an arsenal of weapons that he would use to fight those who preyed on African-Americans. Richmond named his costumed identity Nighthawk, as a nod to the bird that flew overhead the night of his parents' murder.[3]

As Nighthawk, Richmond began operating as a costumed crime fighter in Chicago. He particularly focused on fighting white-on-black crime.[4] When the government's agent, the alien known as Hyperion learned of Nighthawk's existence he sought him out to learn more about him. While Nighthawk went after his typical focus, Hyperion stopped other crimes in the city. When Hyperion finally confronted Nighthawk and suggested he broadened his horizons, Nighthawk ignored the hero and put a stop to some racist church vandals.[5] When Hyperion, and later the Blur revealed themselves to the public, Richmond got in touch with the Blur due to the fact that they were both African-American.[6]

Nighthawk discovered a super-human serial killer who preyed on African-American prostitutes and asked the Blur, and later Hyperion to team-up and help him stop the murderer.[7] While working the streets, Nighthawk found Michael Redstone, the killer, who seriously wounded him.[8] Hyperion and the Blur appeared and saved Nighthawk from Redstone. A fight started between the Powers that caused the deaths of thirty-five innocent bystanders and destroyed or badly damaged private property.[9] The Blur disabled Redstone by using a putty-like invention of Nighthawk's to cover Redstone's mouth and nose, rendering the serial killer unconscious. Nighthawk and Hyperion wanted Redstone dead, but the Blur demanded that he be allowed to survive.[citation needed]

Doctor Spectrum arrived and took Redstone into custody and to a prison originally made for Hyperion.[10] After a heated argument, he, the Blur, and Hyperion dissolved their temporary alliance. Nighthawk insulted the Blur, and berated Hyperion for allowing Doctor Spectrum to take Redstone into government custody instead of holding him over for a public trial. [11][12]

Nighthawk met the Deputy Mayor of Chicago, who told him that people were no longer reporting crimes in the south and west sides of the city because they wanted Nighthawk to take care of crime his way. Meanwhile, Steven Binst, an imprisoned and catatonic serial killer, suddenly woke up after 10 years and walked out of his minimum security correctional facility, made up as a clown, after killing the original one, and drove to Chicago.[13]

Five weeks later, after saving a baby from death and taking him to a woman named Doctor Arredondo, Nighthawk encountered an epidemic of drug addict deaths all over Chicago. As the death count rose to thirty-eight hundred over three days, the governor was helpless to stop the circulation of poisoned drugs. Nighthawk interrogated a federal judge to try to find the supplier, to no avail.[14] Later Binst, made up as a clown, went to a birthday party for the mayor's 6-year-old son, killing the mayor's son and wife using balloons filled with poison gas. The mayor, grief-stricken, committed suicide during a press conference, but not before calling on Nighthawk to kill Binst.[15]

A manhunt for the killer began in Grant Park, where the mayor's wife first met Binst. Nighthawk tracked Binst down to an abandoned warehouse, but was knocked out by Binst with sleeping gas. After escaping Binst, Nighthawk was exposed to the poison. Nighthawk, out-of-costume, went to see Dr. Arredondo. After kissing her, he asked about the baby he saved named "Baby Doe". After Kyle leaves, Dr. Arredondo went to the nursery to look in on Baby Doe. Unnoticed by Dr. Arrdondo and Nighthawk, Binst took down Nighthawk, killed Dr. Arredondo, and kidnapped Baby Doe.[16]

After finding Dr. Arredondo dead, Nighthawk went looking for Binst. The Deputy Mayor of Chicago gave a press conference saying that "Whiteface is dead". Nighthawk tracked Whiteface to a water treatment plant with Baby Doe in hand. Face to face with Nighthawk, Whiteface said how the two men are "opposite sides of the same coin." After a fight and saving Baby Doe, Nighthawk fired a grappling hook gun through Whiteface's midriff, snapped the killer's neck, and drowned him in untreated sewage. Observing the infant for a second, Nighthawk and the child vanish into the night.[17]

By this time the U.S. government was gathering known super-humans into a strike force called the Squadron Supreme. During their investigations into his activities, the government correctly determined that Nighthawk was an African American with no superhuman powers; while therefore having little concern for him, General Richard Alexander still sent two special agents to locate him. Nighthawk found the agents first and imprisoned them in an undisclosed location.[18]

After Nighthawk beat up a pimp, Stanley Stewart tries to convince him to join the newly-formed Squadron Supreme. While Stanley is concerned with the activities of the team, Richmond says no, since he is focused on the goal of crime in Chicago, not the rest of the world.[19]

Nighthawk and the Blur later saw Hyperion and Redstone fighting in Chicago on television. The Blur raced out of Nighthawk's mansion to come to Hyperion's rescue. Later the Blur and Nighthawk arrived in Los Angeles, California ready to join the fight.[20] Although the heroes won the battle, the details are unrecorded. Nighthawk later used a material that could weaken Hyperion in order to force the super-powerful hero to assist him in stopping racial genocide in the nation of Darfur.[21]

The Squadron's Emil Burbank conspired with Earth-1610's Nick Fury and Doctor Doom to alter reality scanning probes created by Earth-1610's Mister Fantastic.[22] The result caused massive devastation on many worlds including the Earth which Nighthawk resided upon. The recorded message in Mister Fantastic's probes led to him taking the blame.[23] In response, Nighthawk joined the Squadron Supreme to Earth-1610 where they attempted to apprehend Reed.[24] This led to a clash between the Squadron and that reality's Fantastic Four, X-Men, the Ultimates, and Spider-Man.[25] Ultimately, the Squadron's reason for attacking was revealed and Richards willingly surrendered.[23]

Richmond returned to his native reality where Richards was going to stand trial for his crimes. His comrades from his native reality soon traveled to Earth-31916 to try and recover him leading to a battle. The battle became more complicated when the Squadron Supreme of Earth-712 were also transported to Earth-31916, sowing confusion.[26] During the battle, Nighthawk found that his abilities were halved thanks to the proximity of his Earth-712 counterpart. In the middle of the conflict, Fury unleashed the Hulk upon the warring heroes.[22] Ultimately, the heroes from Earth-712 were sent back home and the conspiracy between Burbank, Doom, and Fury was exposed. The heroes from Earth-1610 soon returned home with Richards, while the Squadron kept Fury as a prisoner.[27]

Power to the People

With the disappearance of Hyperion and the rest of the Squadron, new super humans started appearing to fill the gap.[28] This led to an investigation into the phenomenon by Nighthawk and the Blur.[29][30] Hyperion eventually returned and announced his plans for global domination.[26] The Blur then tracked down Nighthawk in Chicago and convinced him to fight against Hyperion. Nighthawk was uninterested, finding the situation to be none of his concern.[31] Nighthawk refused to join in the final battle,[32] which ultimately ended in mass destruction and the depowering of many of Earth-31916's heroes.[33]

The Squadron Supreme confronted Earth-616's Cabal during an Incursion and perished in combat right before their Earth was destroyed by the Cabal.[34]

Nighthawk somehow survived the destruction of his universe and found himself on Earth-616, where he banded together with other heroes who also lost their own universes to form a new Squadron Supreme, with their goal being to protect their new world at any cost.[35]

Their first mission involved was to punish Namor for destroying Doctor Spectrum's world and cooperating with the Cabal, as well as for numerous attacks upon the surface world. They eventually confronted him, along with Attuma and the rest of Atlantis. Zarda killed Attuma, while Hyperion yanked the city of Atlantis from the ocean, lifted it high into the air, and hurled it down utterly destroying it. Hyperion proceeded to decapitate Namor with his Atomic Vision.[36]

After Namor's death, Nighthawk changed his name to Raymond Kane and acquired a number of corporations including Namor's, Oracle Inc., with the intent of gaining more knowledge about this new world in which he found himself. With this knowledge he was able to notice several small shell companies transferring oil to a refinery in Texas. Nighthawk decided to investigate it, believing it wasn't actually oil they were transferring. When he got to the refinery he found a Kymellian guarding it and realized that just like he suspected that wasn't oil but rather something alien. After a brief battle with Nighthawk getting the upper hand the Kymellian blew up the refinery after someone he was communicating with ordered him to, Nighthawk escaped the explosion and later found another refinery in Arizona, this time unguarded, with the same substance he found at the previous refinery. As he was investigating it, he realized the substance was highly combustible and also a stimulant for the alien race of Badoon. Steve Rogers and the Avengers Unity Division who were after the Squadron Supreme for the murder of Namor, found him, and demanded he come into their custody.[37]

Before the Avengers could apprehend him, Kane activated a signal that notified his teammates of his dilemma. The Squadron came to his rescue, which devolved into a brawl with the Unity Squad. Nighthawk matched up evenly against Captain America, but not before taking out Doctor Voodoo. The situation became dire for Nighthawk and his compatriots as the Toro joined the fight along with S.H.E.I.L.D.. Thankfully Thundra and Tyndall were there to get the Squadron out of their current pinch, transporting them to Weirdworld.[citation needed]

Once in Weirdworld, the Squadron were attacked by Arkon, who was under the influence of something or someone else. Warrior Woman revealed herself to be a traitor to the team, taking out the Blur and injuring Nighthawk [38]. Raymond and Jeffrey awoke to find that Doctor Druid was the one controlling the inhabitants of Weirdworld. Furthermore Zarda revealed her origins to them and her reason for betrayal. Once Doctor Druid, Warrior Woman, and Arkon left, Nighthawk, the Blur, and Tyndall engineered their escape. Nighthawk and the Blur attacked their guards, the Crystal warriors, before facing off with Zarda. They were joined in their efforts by the rest of the team, eventually destroying Dr. Druid's crystal freeing the inhabitants of WeirdWorld [39]

Upon returning to Earth-616, Raymond continued his investigation of the allied alien forces. He conducted raids and missions for the Squadron, however he keeps his thoughts and findings close to the vest. Returning to his office after an investigation he was confronted by Nighthawk,[40] who was later revealed to be a Skrull.[41]

After Steve Rogers revealed himself to be a Hydra Agent and established a Hydra Empire, seizing firm control of the United States of America, Nighthawk was gunned down while wearing civilian clothes as an African-American protesting the new regime. His costume and mantle were subsequently taken up by his recent crime-fighting protege Tilda Johnson, the former Dr. Nightshade. [42]

Nighthawk possesses the normal strength of a man his age, height, and build who engages in intensive regular exercise.

Like this? Let us know!
Retrieved from "https://marvel.fandom.com/wiki/Kyle_Richmond_(Earth-31916)?oldid=5818530"
Community content is available under CC-BY-SA unless otherwise noted.