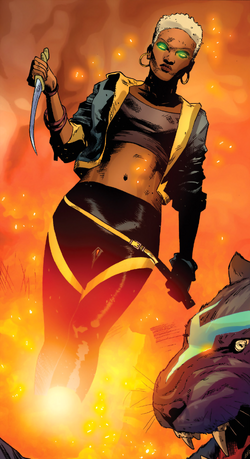 We vote, Quire. On whether we go to help.

After using Shogo to help the X-Men, Kymera left the Jean Grey School, leaving behind a note to Storm explaining that she didn't find herself at the school. Her whereabouts are unknown, though she stated she wouldn't go far.[citation needed]

She reappeared in her own reality when the Shi'ar attacked. She was one of the many left on the ship when it was destroyed thus killing her.[2]

Enchanted Sense of smell: The reason she is an expert tracker is due to her ability to pick up any sense of the person she tracks.[citation needed]

Animal Empathy: Kymera can influence animal behaviors psionically, such as directing a hawk to swoop down and carry a child to safety.[citation needed]

Kymera is an expert hand-to-hand combatant and tracker.[citation needed]

Like this? Let us know!
Retrieved from "https://marvel.fandom.com/wiki/Kymera_(Earth-13729)?oldid=5746304"
Community content is available under CC-BY-SA unless otherwise noted.