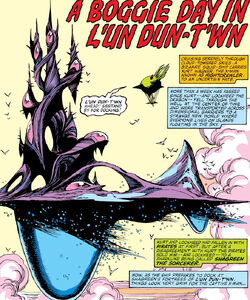 L'un Dun-T'wn was the name of a floating fortress located in an alien dimension. The evil sorcerer, Shagreen, took command of the floating city and used the magic of his power-staff to fortify its defenses, making it an impenetrable mystic retreat. Shagreen employed two giant stone serpents to guard the entranceway to his citadel.

Some time ago, a race of creatures known as Boggies discovered L'un Dun-T'wn and their instinctive curious nature convinced them to explore the castle. Shagreen discovered the diminutive pests, and although he was unable to permanently banish them, he erected a spell, which prevented them from ever leaving L'un Dun-T'wn again.

At the center of Shagreen's citadel was his temple, wherein he conducted dark rituals involving human sacrifice to a demonic entity known as Cthuma-Gurath. To appease Cthuma-Gurath's desires, Shagreen kidnapped a princess named Jinjav Sabree and brought her to L'un Dun-T'wn. Unfortunately for Shagreen, he also managed to acquire an adventurous Earth-based super-hero known as Nightcrawler and his dragon companion, Lockheed. He held Nightcrawler prisoner in one of his many dungeons and attempted to divine the means of Nightcrawler's mutant ability of teleportation.

After Shagreen left the chamber, a few of the Boggies discovered Nightcrawler and set him free. Nightcrawler pledged to help the Boggies escape from L'un Dun-T'wn and rescue the Jinjav as well.

Shagreen's luck soon worsened. Not only had he incurred the wrath of Nightcrawler and Lockheed, but he also earned the attention of a pirate by the name of Long John McGurk. Shagreen had double-crossed McGurk on a previous encounter, and now the pirate wanted revenge. As McGurk’s flying ship, the T'ai Javinee, opened fire on Shagreen's fortress, Nightcrawler faced the villain directly. During their struggle, Nightcrawler succeeded in destroying Shagreen's power-staff. With the destruction of the staff, all of it mystical effects ceased to exist – including the structural integrity of L'un Dun-T'wn. Unable to defeat his adversaries, Shagreen evacuated the citadel as the towers of L'un Dun-T'wn collapsed into the ground. Nightcrawler, Lockheed, Jinjav Sabree and the Boggies all survived its destruction.[1]

Like this? Let us know!
Retrieved from "https://marvel.fandom.com/wiki/L%27un_Dun-T%27wn?oldid=6409487"
Community content is available under CC-BY-SA unless otherwise noted.