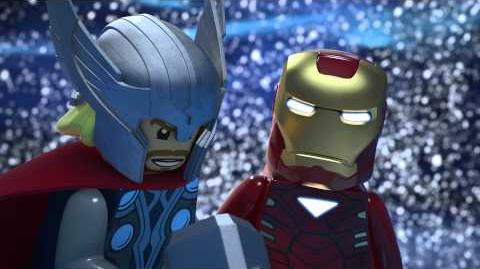 Even I know that's not cool, and I don't know what's going on!

Black Widow, Captain America, and Wolverine take roll of all the overloaded supervillains imprisoned aboard the Helicarrier. In the middle of this, Loki astral projects into Midgard and orders the overloads to jump up and down, bringing down the Helicarrier over Tony Stark's Malibu mansion. The supervillains escape and start to destroy the Helicarrier. Thor flies in with Spider-Man, and the heroes fight the overloads. Thor knocks out Doc Ock, and recognizes the blue energy in his eyes as Nornfrost. Realizing his brother's treachery, he takes Spider-Man and Iron Man back with him to Asgard. Meanwhile, in Loki's snow fort, the Chitauri fix Loki's portal to Midgard just as the three heroes arrive. Loki overloads himself by eating several Nornfrost snowballs, but gives himself a brain freeze. The heroes make use of the opening to attack Loki, but he recovers, throws Spider-Man into a wall, and laughs off Iron Man's repulsor blast and Mjolnir's lightning. Loki reveals his plan to raise an army of overloaded supervillains and take the throne of Asgard, but slips and accidentally blasts himself with energy from his staff. Thor hurls Mjolnir at him, almost making him fall down a deep chasm in the fort. After threatening his brother with a "hammer-noogie," Loki calls off his enchantment, and the overloaded supervillains are depowered. Back in Midgard, the villains are all back in S.H.I.E.L.D. custody. Spider-Man thinks the whole mess was somehow his fault, but Nick Fury cheers him up by giving him a S.H.I.E.L.D. security card and his own Spider-Bike. Spider-Man rides away, but his bike runs out of web fluid, causing him to crash down in New York City. His bike lands not far behind him on top of Stan Lee's hot dog cart, getting mustard on J. Jonah Jameson's shirt, who swears that he knows Spider-Man is behind it.

Like this? Let us know!
Retrieved from "https://marvel.fandom.com/wiki/LEGO_Marvel_Super_Heroes:_Maximum_Overload_Season_1_5?oldid=6497469"
Community content is available under CC-BY-SA unless otherwise noted.