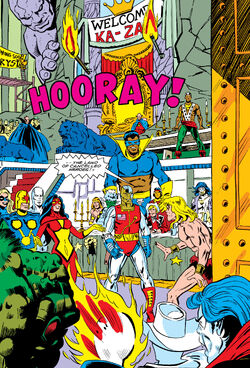 The Land of Cancelled Heroes is a Pocket Dimension within the Omniverse that serves as home to the heroes whose comic books had been cancelled.

After Ka-Zar's latest comic series was cancelled his spirit left the comic book and traveled to the Land of Cancelled Heroes. Here he had to face several characters, including Man-Thing and Devil Dinosaur. Eventually he made it to a meeting place where all the cancelled heroes were gathered to greet Ka-Zar, who announced himself the most cancelled character.[2]

The Land of Cancelled Heroes was seemingly connected to the offices of Marvel Comics and was where they sent all the characters from the series they cancelled. Li'l Silvie and the Wild Pack were at Marvel Comics when they were sent to Land of Cancelled Comics, where she met dozens of characters from cancelled series before Spirit of Cancellation appeared. Silvie formed the League of Liberated Leading Ladies and fought the spirit until he revealed himself to the be Marvel executive who canceled her comic. Silvie then vowed revenge on those who cancelled her and promised she would return in other merchandising forms.[1]

Deadpool also visited the Land of Cancelled Heroes, where he was told that the writing for him was on the wall after his series switched from Joe Kelly to Christopher Priest. However, Deadpool refused to accept his fate and left, with the series continuing on.[3] Deadpool would later return and deliver the corpse of Priest to the cancelled characters, who cheered and celebrated him as the wisest of them for murdering Priest before he had a chance to get him cancelled.[4]

Like this? Let us know!
Retrieved from "https://marvel.fandom.com/wiki/Land_of_Cancelled_Heroes?oldid=6477740"
Community content is available under CC-BY-SA unless otherwise noted.