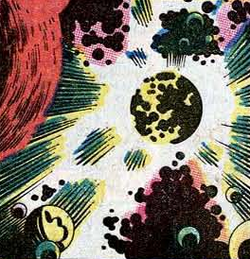 The Large Magellanic Cloud was a dwarf galaxy that orbited the Milky Way. Also known as the Greater Magellanic Cloud, it was the home galaxy of the Kree Empire,[2] as well as the Vorms.[1] The Spartoi also controlled a small empire in the outlying systems of this galaxy.[3]

Like this? Let us know!
Retrieved from "https://marvel.fandom.com/wiki/Large_Magellanic_Cloud?oldid=6424833"
Community content is available under CC-BY-SA unless otherwise noted.