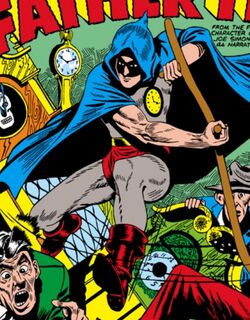 Father Time was just one of many costumed operatives active during World War II who were recruited into the United States military. The purpose was to enlist such individuals in order to publish propaganda in the form of comic books that were commissioned by the United States military and published by Timely Comics. These comics were used to convince Americans to support the war, and increase enlistment. Like many heroes recruited in this fashion, Father Time's fictional exploits were few. For most of these early heroes it was due to their deaths in combat[1].

Presumably, much like the Young Allies[2], the fictional exploits of the Father Time were based on actual events. For the sake of clarity, however, this article differentiates between the two.

Larry Scott's father John was framed for murder and was sentenced to the electric chair. Learning that criminal Chips Brant was responsible, Larry attempted to force the criminal to confess. Knocked out for his trouble, Larry recovered and attempted to bring new evidence that would clear his father's name. Unfortunately, Larry arrived too late and his father was executed just moments before his name could be cleared. Wishing that time could be on the side of law and the innocent victims of crime, Larry decided to become a crime fighter. Designing a time-themed costume and carrying a scythe, Larry called himself Father Time and captured Chips Brant before he could skip town[3]. As Father Time, Larry Scott became a champion against evil, clashing with mobsters and foreign spies alike.

Shortly after his first adventure, Larry learned that his friend Hal Sakson was accused of murdering the crew of the Southern Princess in order to loot it of their recently salvaged supply of gold. As Father Time, Larry exposed the crooked District Attorney as the one responsible by using the superstitions of his hired thugs to frighten them into a confession[4]. After witnessing a bank robbery where bank managers suffocated after being locked in the bank vault too long, Larry went after the crooks as Father Time. Tracking them to their next heist, he allowed himself to be locked in the bank vault, but used his scythe to jam the lock. Because of this he was able to get the drop on the thieves and bring them to justice[5]. Father Time next clashed with insane inventor Zarpo, who perished at the hands of his own device: A bomb that would explode when in contact with a human body for more than five minutes[6].

Father Time's first clash with Nazi spies came in the winter of 1942 when he exposed Yogi Zamor as a Nazi spy who used his alter ego to eliminate defense officials[7]. Shortly after this, Larry's friend Tom Bryant was running for the position of District Attorney, but was framed for assault by the current and corrupt D.A. Peter Drew and mobster Nails Riggly. As Father Time, Larry forced both Drew and Riggly into confessing just hours before the polls opened on election day, clearing Tom's name and allowing him to win the vote by a landslide[8]. Father Time also stopped a mobster named Brettie who was starting fires in the buildings he owned in order to cash in on the insurance[9]. In the spring of that year, Father Time also foiled a plot by jewel thief Yo Lanar and Imperial Japanese spy Agent X to steal black diamonds used in the creation of defense weaponry[10]. In the summer of '42 Larry went to visit his friend the explorer John Trent who recently uncovered a sacret emerald from India. As Father Time, he clashed with Indian natives who sought to reclaim their holy jewel and learned that John really wanted it to be stolen so he could cash on the insurance. When he realized that the idol in John's possession was a fake, Father Time had John arrested for attempting to defraud an insurance company[11].

Subsequent activities of Father Time and his ultimate fate remain unknown at this present time.

Although not one of the most popular heroes of his time, Father Time maintained some notoriety. In the modern age during a celebration of the birth of Steve Rogers as Captain America, his fellow Avenger Hawkeye dressed as Father Time[14].

Like this? Let us know!
Retrieved from "https://marvel.fandom.com/wiki/Larry_Scott_(Earth-616)?oldid=5339162"
Community content is available under CC-BY-SA unless otherwise noted.