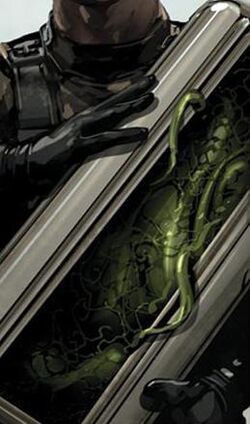 Hair
No Hair At All
Unusual Skin Color
Green ; and Blue
Unusual Features
Lasher is a largely green and light aqua symbiote. It grants it's host long claws, and instead of boot like feet there are two visible toes. It can manipulate its body into various forms. Despite its polymorphic capabilities, it's body structure is overall relatively solid, save for the six tentacles on it's upper back, with three on each side. It's various forms usually lack a mouth, with the exception of the form taken when merged with its war dog host and Sadie.
Origin
Origin
Symbiote
Reality
Earth-616
Place of Birth
Life Foundation lab, Mojave Desert
Creators and Appearances
Creators
David Michelinie, Ron Lim
First Appearance
Venom: Lethal Protector #4
(May, 1993)
(Unnamed)
Carnage, U.S.A. #2
(January, 2012)
(Named)

The sinister Life Foundation, an organization that was preparing for the M.A.D. (Mutually Assured Destruction) fallout of the Cold War, or in the event of world chaos, sought to provide a comfortable life for their wealthy clients after the impending holocaust. Needing a superhuman police force to protect this utopian future, the Foundation's leader Carlton Drake saw potential candidates for these futures guardians in the unborn offspring of Venom and subsequently ordered him to be captured.[1]

Once the foundation successfully captured Venom, who was in San Francisco at the time, they brought him to their lab in the Mojave Desert of California. While there they forcibly extracted five "seeds" from Venom and hatched them. As it was still too young to control a host, it was merged with Ramón Hernández, a security force officer of the Life Foundation, which was comprised of cops, soldiers, and mercenaries. Together it and Hernandez along with the other four would become the Foundations Guardian Symbiotes.[2][3]

When Spider-Man followed his “sister”, Strike Agent Four. Donna Diego, he and the other Guardian Symbiotes all attacked the wall crawler. But before they could kill him, Eddie, who had gotten free once they removed the Venom symbiote, appeared. In order to beat them, Eddie once again merged with Venom symbiote, and managed to defeat the Guardian Symbiotes alongside Spider-Man using a metabolic accelerator, which rapidly sped up the aging process of the symbiotes and eventually turned them to dust when Venom cranked up the power, seemingly killing them. Lasher's host, as well as the other hosts of the symbiotes, also appeared to die in the ensuing explosion.[4]

The symbiote not only survived along with it's siblings due to efforts by the Life Foundation, but their hosts had too. But he and the others began to gain influence over their host, so the hosts wanting to keep control planned to seek out Eddie Brock for help.[5]

When Ramon Hernandez and the others suddenly left the Lift Foundation facility to get Eddie Brock's help, Donna went alone to talk to Brock/Venom but failed in her two attempts. He and the rest of the former Guardian Symbiotes joined her shortly after in her third attempt to get Brock's help. Together they broke Brock, who had lost the Venom symbiote, out of a New Mexico facility and brought him to an abandoned factory in a small city near Chicago to make him help them.[6][7][8][9][10][11]

Unfortunately yet again Brock refused, due to his belief that all of the Venom symbiote's “children” become psychopathic killers like Carnage. Later Brock managed to escape and shortly after his sister the largely dark purple and dark pink mix symbiote along with her host Leslie Gesneria was found dead. Though at the time they believed it was Eddie Brock who killed them and wanted to make him pay.[12]

When his brother the light orange symbiote and his host Carl Mach was later killed too by a sonic blade, Donna went to kill Brock but his host Hernandez stopped her in the hopes Brock can still help them. Unbeknownst to him it was Donna, Donna who had snapped from her schizophrenia and his sister's influence back when she first reached out to Brock. But by the time he and his brother the largely blue symbiote host Trevor Cole realized this, she had picked up the sonic blade that she had stolen from the facility that held Brock and killed his brother and the host.[13]

As his host Hernandez tried to calm her down, she killed them both and she herself would be beaten by a reunited Venom and Brock. After Venom escaped the team that had been tracking the Venom symbiote and they contained them, it was revealed that they had survived though this time their hosts did not.[11][14]

The symbiote and his four siblings were taken to the Vault a prison for superhuman criminals, once there they where sent to facility #12 for scientists to study and painfully experiment on them.[15]

One day during the Symbiote invasion, Venom and Brock sent world wide a psychic shriek that seemingly wiped out the invading symbiotes. Due to this along with the pain they were already experiencing, “he” and the others broke free and merged into one creature… a "Hybrid".[16][17]

After briefly bonding with Guardsmen Six, Scott Washington, the new Symbiote escaped to find and bond with Scott once again and become the vigilante called Hybrid.[18]

After some time as the vigilante Hybrid they once again believed to be dead when Eddie Brock took it upon himself to kill all symbiotes. But again they survived and the host did not, they were presumably found by the U.S. Army and was defused into four separate creatures again and named Lasher, Riot, Phage and Agony.[19][20]

“He” and the others though apparently due to being defusioned had become catatonic and unable to totally bond with a host, were given to each member of the Mercury Team. A Contingency B team who has been training with Lasher and the others for the soul purpose of eliminating Carnage. Lasher was partly bonded to a female military trained German Shepherd war dog and leashed, and controlled by the team leader Chief Petty Officer Marcus Simms.[20]

When Carnage began taking over the people of Doverton Colorado and the Avengers (Captain America, The Thing, Hawkeye, and Wolverine) save for Spider-Man, the team was sent in aided by Scorn. The team took on a large number of Carnage-possessed townspeople, but ran into big trouble when Carnage and the Symbiote Avengers joined the fight. But even when Spider-Man, the sheriff Eric Morrell, a few townies and the arrival of Agent Venom the fight didn’t look good.[21]

But the battle seemed to turn when Scorn driving a souped up tractor caught Carnage and Agent Venom, who were fighting at the time, to Ralsby Meat Packing Plant where she had made a device that separated the symbiotes from Thompson and Kasady, freeing the Carnage possessed. But things only continued to get bad as without Kasady’s control the Carnage symbiotes ran wild and took over the local zoo life. As Lasher and the others fought a losing battle Simms ordered the go ahead to torch the area and thanks to Captain America kept the blast localized.[22]

With the Carnage symbiotes destroyed, Thompson having rejoined the Venom symbiote captured and handed Kasady over to the Avengers. Lasher and “his” siblings were put back in their containers after Simms and the team left for the others to clean up.[23]

When Carnage began a seemingly random killing spree throughout Oklahoma Deadpool tried to stop him and his girlfriend Shriek. But as the body count raised it was revealed that Kasady was after Mercury Team and Lasher as well as his siblings. Kasady found the team in a underground base in an abandoned town, he killed them all but the German Shepherd, who managed to get to Lasher and save the other symbiotes. When Deadpool showed up to find the dead soldiers and empty symbiote containers, he was cut to pieces by Kasady and left like that until Lasher with his siblings attached to the war dog saved him by having the other three bond and pull Deadpool together.[24]

Instead of becoming one entity as Hybrid as they did before, the four symbiotes partly bonded with Deadpool and became a composite monster with Deadpool in full control despite the extra voice in his head. Lasher and Deadpool went after Carnage who was at Carrington Cottage Psychiatric Hospital torturing staff and patients with Shriek. As Lasher attacked Carnage, Deadpool tricked Shriek to get Carnage alone, and then managed to trick Carnage into taking out Shriek which drove Carnage into giving himself up.[25]

In the end Deadpool gave up the other symbiotes to Lasher and asked the dog to bring them back to the government in hopes they’ll be able to take care of them.[26]

Following Knull's awakening, Lasher and the other Life Foundation symbiotes succumbed to his control. When the German Shepherd was found by a young girl named Sadie - whose family was falling apart - Lasher and its brethren separated from each other and took over Sadie's family to grant her wish that they be able to stay together, with Lasher bonding to Sadie herself. Following this, the family set out for Manhattan in order to assist in Knull's reawakening.[27][28]

They were forced to serve Carnage under the threat of death and attacked Dylan Brock, Normie Osborn, and the Maker. Lasher took on the Maker, but before it could kill him, the Maker grabbed a sonic gun and blasted the Lasher symbiote off of its host. The Maker tried to kill Sadie before the Lasher symbiote could re-bond to her, but Riot, Agony, and Phage stopped him. Sleeper appeared just in time to save Dylan and Normie from Phage,[29] but the Maker managed to put it along with the other symbiotes under containment.

However, Normie and Dylan decided to flee, afraid of what the Maker could do to them. In order to escape, Dylan tried to use firearms on him but it ended up freeing the symbiotes, except for Sleeper. The four Life Foundation symbiotes forcibly bonded to the Maker and re-merged into Hybrid, attempting to get Dylan's codex. Fortunately, The Thing, Wolverine, Captain America and Spider-Man arrived and kept Hybrid occupied.[30] Dylan freed Sleeper and used his powers to control the symbiote, dousing him in napalm. Hawkeye shot a flaming arrow at Hybrid, killing the symbiotes and seemingly killing the Maker as well, though in actuality he was able to escape into the sewers.[31]

The Lasher symbiote gives its host the following powers:

Like this? Let us know!
Retrieved from "https://marvel.fandom.com/wiki/Lasher_(Klyntar)_(Earth-616)?oldid=6465259"
Community content is available under CC-BY-SA unless otherwise noted.