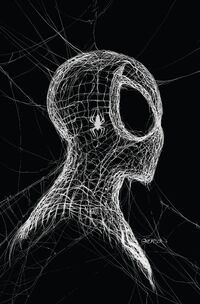 After the choices made by Peter Parker during his campaign against the returned Sin-Eater, Kindred steps out into the open to make his move against the web-head by taking him to a dark corner of his soul. As his plans come to fruition, the revelation of Kindred's true identity will leave an impact on Spider-Man's life. Concurrently, The Order of the Web who worked to aid Spider-Man are manipulated by Kindred, and then assisted by Doctor Strange and Black Cat. Each of the spider heroes has their own limits pushed to the edge against Sin-Eater and Kindred's schemes, with a twist ending that will change the formula of Spider-Man's adventures in the coming days.

Retrieved from "https://marvel.fandom.com/wiki/Last_Remains?oldid=6338799"
Community content is available under CC-BY-SA unless otherwise noted.