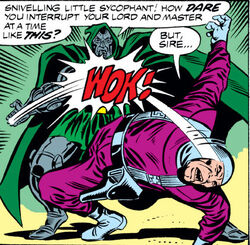 Doctor Doom is commander-in-chief of the Army, which must be absolutely loyal and efficient. The politics in the Army includes victory or death, but never defeat.
The army is mostly formed by robots, but Doom's personal Guard is formed by 50 humans as a propaganda tool to show that Doom values humans too.
The human soldiers are brave when defending Latveria, although coward when fighting super-humans, unless Doom himself is in the battlefield.
Doom has selected some of these troopers for personal projects such as the Doom Squad.

Retrieved from "https://marvel.fandom.com/wiki/Latverian_Army_(Earth-616)?oldid=3497819"
Community content is available under CC-BY-SA unless otherwise noted.