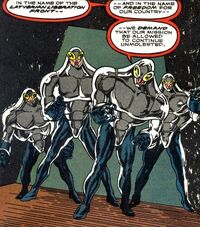 The Latverian Liberation Front (or LLF) was created as a false terrorist group by Doctor Doom (Kristoff Vernard). They were allegedly attempting to seek the death of Doom to free Latveria from his dictatorship. Vernhard employed them in a plot to validate his position as the ruler of Latveria and develop sympathy in the international community.

The group staged an assassination attempt on him while he was in Canada for a meeting on water negotations with Canada. He laid out clues to lead Alpha Flight to foil their plot. While attempting to apprehend the LLF members, Vernhard remotely activated their armors' suicide function. Vernhard asked for Alpha Flight to act as bodyguards, given the perceived threat to his life.[1]

During the actual water negotiations, the LLF attacked again. Alpha Flight was able to defeat them and they again apparently self-destructed. Guardian (James Hudson) was able to deduce that the team was being remotely controlled by Vernhard. When confronted, Vernhard denied the claim and teleported away.[1]

Retrieved from "https://marvel.fandom.com/wiki/Latverian_Liberation_Front_(Earth-616)?oldid=5548360"
Community content is available under CC-BY-SA unless otherwise noted.