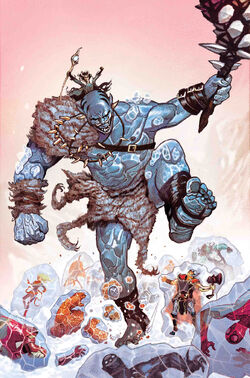 King Laufey was the leader of the Giants of Jotunheim. He was married to Farbauti, with whom he had a son named Loki. As Loki was born small, a motive of embarrassment for his parents, his existence was kept a secret.[2]

As Odin, the King of Asgard, marched his forces into Jotunheim to battle the Frost Giants, a future Loki came to his young past-self to ensure their destiny.[3]

The younger Loki went to his father with alleged information about Odin's position in the next battle, and pushed Laufey to attack him by calling out his pride. Laufey struck his son but decided to attack Odin, as planned by the Lokis.[3]

The next day, after the fateful battle and Odin's claiming of Loki as a son, Laufey was left for dead, wounded, but alive. The future Loki then gruesomely killed him, stating that he would never strike him again.[3]

Mother was an interdimensional parasite that lurked in the Multiverse seeking out powerful beings and realities to feed on. She tethered herself to parents and began to act overbearingly parental and protective; at some point, she impersonated Laufey.[4]

Playing with the Dead

Years later, a group of Frost Giants retrieved Laufey's skull and traveled to Midgard with a Frost Giant wizard to try to revive him. They slaughtered many villagers to use their blood to create blood ice and drag Laufey's soul from Hel. However, Odin's son Thor came along with various Viking ships to put an end to the massacre, and he killed the Frost Giants before they could finish the spell and the skull was lost in the sea.[5]

Centuries later, a Roxxon submarine detected the energies coming from the skull and discovered it,[5] taking it to Roxxon Island with other magical items.[6] During his campaign to unify the Dark Elves of Svartalfheim under his rule, Malekith the Accursed made an alliance with the Frost Giants,[7] promising them to find the skull.[8] After he became king and they offered an alliance to the Fire Demons,[9] Malekith discovered that the skull was in Midgard and in Roxxon's possession. Lord Skrymir was hesitant with invading Midgard without their king, but Malekith told him that his spies in Asgard informed him that Thor had lost Mjolnir, which convinced him to attack Midgard.[10] The Frost Giants raided a Roxxon underwater facility, and Malekith demanded the location of the skull. Killing two employees, he and the third employee were interrupted by the arrival of Thor. Malekith taunted him over the rumors of the loss of Mjolnir. They battled, but the Giants attacked and restrained him. Malekith took his axe Jarnbjorn and cut off Thor's arm, leaving him to drown while he and the Giants looked for their prize.[8]

They freezed the Pacific Ocean and made a stairway to Roxxon Island, also freezing Asgardian warriors led by Freyja and Avengers that tried to stop them. They attacked Roxxon Island and Malekith confronted Roxxon C.E.O. Dario Agger, but Agger escaped into his vault, which contained Laufey's skull.[6] Malekith entered the vault and demanded Dario to give him the skull but he transformed into his Minotaur form and they battled. As both claimed their right to the skull, the new female Thor, who had defeated the Giants, destroyed it, unaware it was a decoy.[10]

Agger latter contacted Malekith, revealing that the skull destroyed was a decoy the giants were meant to get and the two started bargaining for the skull.[11] Agger and Malekith came to a deal: Dario would give him the skull in exchange of the mineral rights of all realms Malekith conquered.[1] Malekith convinced Agger to celebrate in the Dark Elf way and he teleported the two of them to Alfheim, where they slaughtered many Light Elves.[12] Malekith and Agger then went to Jotunheim and, using the blood of a hundred murdered Light Elves, Malekith performed a spell that resurrected King Laufey.[13]

Laufey became a member of Malekith's Dark Council. When his son Loki approached the Dark Council seeking to join them, Laufey didn't approve his acception into the council and decided to test him.[14] Laufey took Loki to their home world of Jotunheim and asked him to cross a bridge and if he came back alive, he would support his entrance in the council. There, Loki was ambushed by five Frost Giants who Laufey claimed were his strongest warriors. However, Loki easily defeated them simply by using words alone, causing them to mutilate each other and themselves. Later, Laufey traveled to Alfheim and told Malekith that he wanted both his son and the new Thor dead.[15]

The Dark Council eventually launched an invasion of Midgard with Laufey and his Frost Giants taking control of North America. When Laufey tried to kill All-Mother Frigga, Loki unexpectedly rescued her by severing Laufey's left hand. Expressing that he considered Loki his biggest mistake, Laufey then consumed him.[16] When the world's heroes and various races brutalized by the Dark Council began fighting back, Laufey was confronted by various heroes who told him that the Dark Council was finished. Laufey revealed that he never really cared about the Dark Council and had planned to turn on it eventually before revealed that he possessed the Casket of Ancient Winters, which was stolen by Loki. Laufey then swallowed the Casket and unleashed a blizzard that began consuming the entire world. Daredevil hurled Heimdall's sword Hofund at Laufey, but he swallowed it. That was what Daredevil wanted, however. After having one of his eyes smashed out by an alternate reality Mjolnir thrown by Jane Foster, Laufey was killed when Loki carved his way of his father's abdomen with Hofund.[17] Meanwhile, the Frost Giants rebelled upon Jotunheim.[18]

Frost Giant Physiology: As a Frost Giant, Laufey possesses superhuman strength and resistance to physical injury. He is also immune to extreme cold.

Heat: When exposed to extreme heat, Laufey will start to shrink in size. When he returns to the cold climate of Jotunheim he will eventually grow back to his normal size.

Laufey sometimes carried a large club. After losing his left hand, he replaced it with a crude prosthesis consisting of an icy mace. He formerly wielded the Casket of Ancient Winters.

Like this? Let us know!
Retrieved from "https://marvel.fandom.com/wiki/Laufey_(Earth-616)?oldid=6440666"
Community content is available under CC-BY-SA unless otherwise noted.