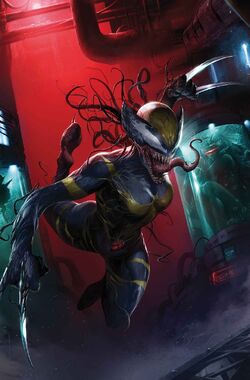 Much like her Earth-616 counterpart, Laura Kinney was created by the Facility as a clone of James "Logan" Howlett, and raised as an assassin. On her fifth attempt to escape from the Facility, X-23 was cornered in a laboratory and accidentally punctured a tank containing the Venom symbiote, which emerged and bonded to her. Using her newfound powers, X-23 escaped the Facility and re-named herself "Laura", adopting the codename Venom.

Laura took to using a derelict bank in New York City as her lair, leading to rumors among the street people that it was haunted. When a group of street kids sought refuge in the bank from Zebra Daddy, a notorious gangster, Laura tried to scare them away — the ravenous symbiote suggesting she eat them. When they were attacked by Zebra Daddy and one of his thugs, however, she transformed and intervened, killing the thug before mauling Zebra Daddy. Persuaded to spare him, she welcomed the Runaways into her home despite the symbiote warning her that she was putting her new friends in danger. To protect them, Laura gave them pieces of the symbiote — enabling them to undergo monstrous transformations, but instructed them to use this as a last resort.

While helping the Runaways steal ice-cream, Laura noticed that Facility agents had found her and that her friends were fighting them. Joining the fray as Venom, she scolded them for not listening and told them to fall back to the bank vault. As the Facility's soldiers begin cutting through the door, the Venom symbiote called back the parts of itself that it gave the Runaways so that it could fight at full power, to their dismay. Before she could make her last stand, Venom was teleported by a Venomized incarnation of Doctor Strange and approached by a Venomized incarnation of Captain America. Initially enraged at being taken from her friends, she was told that she had been summoned to fight a war against a species called the Poisons.[2]

As a member of the Resistance, Laura spent most of the war fighting alongside a Venomized incarnation of her genetic template, adding a red X-shaped belt buckle to her Venom form and taking up the codename Wolverine. She was one of the few incarnations of Venom to survive the war, being returned to the bank vault by Doctor Strange just prior to the destruction of the Poisons' lair.[3]

Despite having been raised as an assassin, Laura dislikes fighting and killing — which occasionally puts her at odds with the predatory urges of her symbiote. Lacking social skills, she is awkward around people, but was overjoyed to make friends for the first time and becomes fiercely protective towards the Runaways.[2]

Seemingly those of the Laura Kinney and those of the Venom symbiote of the Prime Marvel Universe. The symbiote is further able to separate pieces of itself that can bond to others to augment them, and can freely recall these pieces to augment itself.

Wolverine's claws have been coated with the nigh-indestructible metal Adamantium and, as a result, her claws are virtually unbreakable and are capable of cutting almost any substance. She also has clawed fingers and fangs as a result of bonding to the Venom symbiote, and can freely project its biomass as tendrils to attack and restrain opponents.

Like this? Let us know!
Retrieved from "https://marvel.fandom.com/wiki/Laura_Kinney_(Earth-24398)?oldid=5507905"
Community content is available under CC-BY-SA unless otherwise noted.