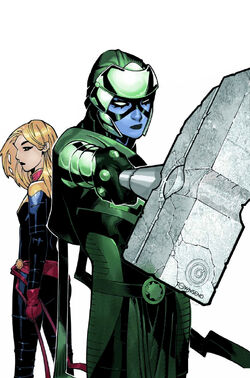 Lauri-Ell is a Kree soldier of the Kree/Skrull Alliance, as well as the half-sister of Carol Danvers, the super hero better known as Captain Marvel.[1] Lauri-Ell and Carol first crossed paths during the Cotati invasion of Earth, after which Lauri-Ell took possession of the Universal Weapon and became Emperor Hulking's Accuser.[2][3]

Lauri-Ell was a soldier artificially bred by scientists of the Kree. She was created from the DNA of two powerful Kree Soldiers, one of which was Mari-Ell. Because of this, Lauri-Ell was the half-sister of Carol Danvers, the half-human, half-Kree super hero called Captain Marvel. A powerful warrior herself, Lauri-Ell was designed to be an excellent soldier. Even though fighting came naturally to Lauri-Ell, she hated waging conflict.[1]

During the early days of the Kree/Skrull Alliance, Lauri-Ell was stationed in K'in-Al, an experimental sanctuary where citizens of the former enemy empires were to live together in peace.[4] The city's existence was short-lived due to its destruction at the hands of the Kree-hating human Wastrel. Lauri-Ell was the only survivor of the explosion, and the blame for it befell on her.[5] When Captain Marvel, who had become the Alliance's new Accuser, arrived at the scene, Lauri-Ell surrendered and accepted her execution despite claiming to be innocent. Using the Universal Weapon to probe Lauri-Ell's mind, Carol found out her parentage, which Lauri-Ell had avoided disclosing to spare Carol of the guilt of killing her own half-sister. Carol became convinced that Lauri-Ell was innocent, and took her to Earth for her protection until she found the true culprit.[1]

On Earth, Lauri-Ell joined forces with Carol to combat invading Cotati forces, allowing the two sisters to bond.[4] Captain Marvel eventually returned to K'in-Al and managed to apprehend Wastrel with the help of her allies. In the meantime, Lauri-Ell had decided to help stop another Cotati attack in which one of the victims was Carol's friend Kit Renner.[5] Lauri-Ell was joined by Carol and her allies. During the fight, Carol was overpowered by Cotati soldiers and lost grip of her Universal Weapon. The hammer called to Lauri-Ell, and she wielded it. Lauri-Ell's perfect harmonization with the hammer signaled her potential to become an Accuser herself. After defeating the Cotati, Lauri-Ell returned the hammer to Carol so she could fulfill her promise to use it to put an end to the Cotati invasion.[2] Following the end of the Cotati's Empyre, Emperor Hulkling of the Alliance appointed Lauri-Ell his new chief Accuser in place of Carol.[3] A few weeks later, Lauri-Ell paid Carol a visit at the Danvers' summer home in Harpswell so she could pay her respects at Mari-Ell's grave.[2]

Accuser Armor: Granted by the Universal Weapon as she was suited for the role.[2]

Universal Weapon: Originally belonged to Ronan the Accuser. Can be used to attack physically, fire energy blasts, fly, manipulate matters, probe minds and find out what happened at a particular point in time.[7]

Like this? Let us know!
Retrieved from "https://marvel.fandom.com/wiki/Lauri-Ell_(Earth-616)?oldid=6432995"
Community content is available under CC-BY-SA unless otherwise noted.