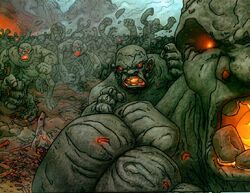 The Lava Men are a race from Subterranea made of living lava.

After the Second Host, the Deviants, now in their underground habitats and seeking to create new slaves, genetically experimented on the their few left human slaves, creating new lifeforms after centuries of experiments: The Gortokians Gor-Tok and Thera, followed by others. The Gortokians eventually revolted against the Deviants' rule.[1] A faction of them formed a cult to the demon Cha'sa'dra and were turned into the Lava Men who went on forming their own society.[2]

A short time later, an explosion from deep within the Earth rocked the realm of the Lava Men, as the Living Rock forced into it. The Lava Men learned that the Living Rock would generate explosive force when struck, and that it would continue to grow in size until it exploded. Jinku, the witch doctor of the Lava Men, counseled the King to build a machine and drive the Living Rock to the surface world where it would destroy the surface of the planet instead. Despite Molto's protests, the King agreed and followed Jinku's recommendations. This brought them into a conflict with the Avengers, which ended when the Avengers duped the Hulk into striking the Living Rock in the one spot that would destroy it. With the threat over, the Lava Men returned to Subterranea.[4]

Some time later, Jinku had a vision in his dreams promising to lead his people to conquest. Unbeknownst to Jinku, this dream was actually caused by They Who Wield Power for their own purposes. Nonetheless, Jinku convinced the King to steal the Mole Man's volcano-activating machine from the Moloids. The machine lacked a power source, and Jinku sought to obtain Mjolnir, the hammer of Thor, as that source. To this end, he ranted of his plans to destroy humanity in front of Molto, who he knew would inform Thor, causing him to investigate. Jinku followed Molto and blasted him, mortally wounding him, but not killing him instantly. Molto made his way to the surface world where he encountered the Human Torch, whom he initially mistook for an agent of Jinku, but then convinced him to summon Thor. After relating his story to Thor and the Torch, Molto died, and his body disintegrated (as all Lava Men do at death). But his warning enabled Thor and the Torch to stop Jinku's plan.[5]

When a Project Pegasus borer probe wreaked havoc in Lava Men settlement, they retaliated by invading Project Pegasus, clashing with the Avengers again before returning to Subterranea.[6]

The Lava Men also became involved in a war against the other Subterranean races, and captured the Mole Man.[7]

Later, Jinku magically created non-sentient Lava Men that attacked the Avengers and the Hydrobase. He revealed how the demon Cha'Sa'Dra's death killed hundreds of Lava Men, and placed some others in immobile chrysalis state. A vengeful Jinku unleashed monster against the Avengers in Subterranea. Finally the immobile Lava Men attained new golden forms, Jinku similarly transformed, and all made peace with the Avengers.[8][2][9]

Unfortunately Jinku and the others transformation to golden forms was temporary. Sometime after reverting back to a more monstrous lava form Jinku and the Lava Men attacked X-Force.[10]

Lava Men also exist in this reality. They bodies appear more composed of flame than their Earth-616 counterparts. These Lava Men also sub terrain in nature and appear mute. The Lava Men captured Arthur Molkevic and appeared to be about to execute him, when they were rescued by the Thing, Josie Hart, her "Think Tank" and Molekevic's loyal Ani-Men. Many Lava Men fell in the ensuing battle.[11]

High resistance to extreme heat and flame; continually generate intense heat from their bodies, and can increase the amount of heat at will, enough to be able to melt a weapon in his vicinity; mystical ability to cause large amounts of volcanic ash to appear, seemingly from nowhere, and to transform metal into ash; immunity to aging. Some Lava Men can mystically transform themselves into twenty foot tall giants composed of hardened lava. Some Lava Men can mystically command molten lava to do their bidding by performing a ritual prayer to the demons they worship. The golden Lava Men can transform their shapes, and in doing so, even merge their bodies with one another. They once formed themselves into a large sphere that could defy gravity. Some Lava Men have shown body parts can work independently when cut fom their body. Can reform if bodies are broken up. Their minds have some sort of protection from telepathy.[12]

Subterranea (a network of caves and passages far beneath Earth's surface, with water in underground rivers, pools, and lakes, high temperatures, no weather

No clearly female Lava Men have been depicted to date. It is unclear whether there are no female lava Men (since the males do not age, they do not need to reproduce themselves to continue their race's existence), whether the females live apart from the males, or whether female Lava Men are identical to male Lava Men.

Retrieved from "https://marvel.fandom.com/wiki/Lava_Men?oldid=5619056"
Community content is available under CC-BY-SA unless otherwise noted.