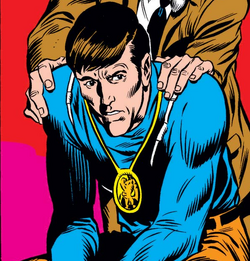 Lawrence Trask was the son of scientist Dr. Bolivar Trask, the original creator of the Sentinels. At the age of five, Larry's mutant power of precognition manifested, when he predicted the death of his mother. Soon after, Larry lost his older sister, Tanya Trask, as her mutant powers of time travel caused her to "disappear" one day.[1]

Fearful of the "mutant menace", Bolivar hired a team of scientists, to develop a medallion that would block Larry's powerful visions of the future, as well as erase any memory of them, leaving Larry unaware of his mutant heritage. Larry was skeptical of his father's distrust of mutants, until the night his sister returned to the past a young woman calling herself Sanctity. Tanya hoped to change the future, by stopping her father's creation of the Sentinels, but she was thwarted by her friend Rachel Summers. Though Rachel successfully prevented Larry from witnessing the psychic duel that ensued, she could not hide the physical damage caused by the fight. This convinced Larry that dangerous mutants did exist. As his son grew older, Bolivar enlisted Larry's help in the creation of the first wave of Sentinels. Dr. Trask occasionally removed Larry's medallion, so that he could secretly observe and record Larry's predictions about mutants in the future, and Larry accurately predicted the assassination attempt of Senator Robert Kelly.[2]

Larry later blamed the X-Men for his father's death and used Bolivar's notes to create a new, stronger wave of Sentinels, starting with Number 2, a prototype much like his father's Master Mold. Larry was aided in his effort by Federal Judge, Robert Chalmers, who was a friend of Bolivar's and knew Larry's secret. Larry created a base for his Sentinels inside the Colorado Rockies and ordered the robots to abduct and detain all known mutants. One of these mutants was Alex Summers, who Larry gave a containment suit to control his unstable powers and the codename: Havok. Chalmers became disillusioned with Larry's plans and he forcefully removed Larry's medallion, hoping that Larry would cease his attacks on mutants if he learned the truth about his own mutation. This, however, backfired, when a furious Larry gave the order for the Sentinels to destroy all mutants and he himself was targeted for annihilation. Luckily, the Sentinels were outwitted by Cyclops, who convinced them to destroy the source of mutation, the sun, and they flew into space. Meanwhile, Larry had plunged into a state of catatonic shock and Chalmers put the medallion back on him to erase the knowledge of what had happened to him.[citation needed]

Larry did not return to his mutant-hunting ways, though he would have another brush with his Sentinels.[3] The Mark II Sentinels returned from space, calling themselves Neo-Sentinels, with a new directive and abducted the Scarlet Witch,[4] as part of an elaborate plan to sterilize humanity (thus preventing the birth of future mutants), by causing a solar flare. Larry was abducted by Wanda's brother, Quicksilver, who remembered Trask from when he and his sister were previously abducted by the Sentinels. Quicksilver removed Larry's medallion, restoring Larry's knowledge of a Sentinel base in Australia. This also re-awakened Larry's precognitive abilities and he had a powerful vision of all-encompassing darkness that he interpreted to be the end of the world.[5]

Larry and Quicksilver traveled to Australia and joined the Avengers, in the effort to save the Scarlet Witch. Larry turned on the base's mutant detector, which revealed that Number 2 had been mutated, due to close contact with the sun's radiation in space. Larry used logic to turn the Sentinels against their "mutant" leader and the robots destroyed each other. Larry saved the world from his father's creations; however, he was crushed to death when the Sentinels were depowered and toppled over. The black void Larry saw was not the end of the world; he had unknowingly predicted his own death.[6]

Precognitive Dreams: Precognitive abilities, which manifest themselves when conscious or in his dreams, enabling him to envision possible future events. Although there are countless possible futures, Larry foresees the most probable future path and, therefore, his predictions usually come true. Larry seemingly cannot foresee events more than roughly a few days in the future.[5]

An amulet that suppressed his mutant power.

Like this? Let us know!
Retrieved from "https://marvel.fandom.com/wiki/Lawrence_Trask_(Earth-616)?oldid=5664470"
Community content is available under CC-BY-SA unless otherwise noted.