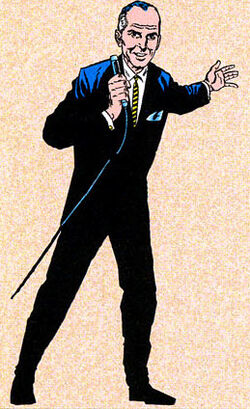 Professor Lawrence Zaxton was a jealous colleague of Dr. Donald Blake. When Blake built an android and asked Zaxton to display it at a convention, Zaxton deliberately caused the android to malfunction. Thor removed the android from the scene before it detonated. Zaxton then kidnapped Blake's nurse Jane Foster and blackmailed Blake into helping him perfect his Duplicator machine.

When their work was complete, Blake attempted to become Thor and sneak away, but Professor Zaxton witnessed his transformation and used his device to make an evil Demon Duplicate of Thor. He armed the duplicate with two copies of Thor's hammer Mjolnir, and set it after him.

However, Thor eventually realized that because the duplicate was not worthy of the power of Mjolnir, it could not actually harm him, and he destroyed it.

As Thor set after Professor Zaxton, himself to try and escape, but he fumbled with his device and fell off a bridge to catch it. Thor let Zaxton's good duplicate carry on with the professor's life.[2]

Professor Zaxton was a brilliant inventor.

Professor Zaxton created a duplicating machine which fired rays that duplicated whatever they struck. Duplicates of living beings tended to have the opposite personality of the original.

Like this? Let us know!
Retrieved from "https://marvel.fandom.com/wiki/Lawrence_Zaxton_(Earth-616)?oldid=5410004"
Community content is available under CC-BY-SA unless otherwise noted.