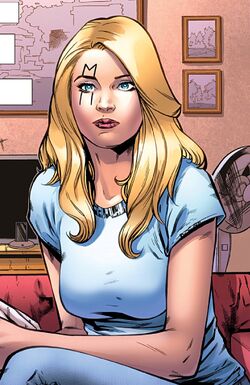 Layla was born and raised in Hell's Kitchen with her two loving parents, Mrs. and Mr. Miller. When the Millers died in a tragic automobile accident, Layla was placed in the Saint Joan's Orphanage in the Bowery in New York City. Soon after relocating to the orphanage, Layla's mutant power manifested and she grew horns and discovered she could breathe fire, frightening the human orphans and causing them to reject her.[8]

When the insane mutant, the Scarlet Witch, used her powers to remake reality into a world in which mutants were the dominant species, everything changed for Layla. Her parents were alive and in health, and she lived with them and attended Brooklyn's PS 45. Additionally, a new set of mutant powers manifested and enabled her to perceive divergent realities, allowing her to remember the old reality. Seeking the help of Daredevil, Layla instead found Luke Cage, Hell's Kitchen's most powerful crime lord and leader of a human resistance movement. Layla was able to restore Luke's true memories, and after rescuing Wolverine, Cage's group set out to use Layla's powers to unlock the unconscious memories of other heroes. Under the guidance of Emma Frost, Layla restored the memories of many of Earth's heroes, who then led an assault on the Scarlet Witch in Genosha. The attack on Genosha prompted the Scarlet Witch to restore reality, only with a significantly reduced mutant population, an event later called M-Day.[11]

With reality restored, Layla woke up and found herself back in the orphanage she hated - only without her former mutant powers.[12][13] Shortly thereafter, an adult Layla returned from the future to speak with her younger self and uploaded all the knowledge about her lifetime and information for the next 80 years into the mind of her younger self.[14] Armed with this pseudo-precognitive knowledge, Layla showed up at the office of X-Factor Investigations in Mutant Town offering help and claiming she "knows stuff". Without an invitation or permission, Layla began working as a file clerk and using her knack for predicting the future to give X-Factor advice and steer them in certain directions.[15]

Layla directed Siryn onto the Santiago case, saving her life,[16] and later saved Rictor from a Singularity Investigations assassin.[17] But when Siryn was severely beaten by Tryp Junior, Layla was blamed for not warning X-Factor and voluntarily returned to the orphanage. Layla was beaten and ridiculed at the orphanage, and Madrox and Wolfsbane brought her back to X-Factor.[8]

When Quicksilver arrived at X-Factor's office with information about the true cause of M-Day, Layla declared herself Quicksilver's nemesis.[18] Later, with the Inhumans looking for Quicksilver, Layla advised him that Black Bolt wasn't going to kill him during the confrontation and that he should take a small trip to the future to see the outcome of what happened to them. She and Jamie went to the meeting where she revealed to Jamie that she tried to kill Pietro but couldn't because he escaped and that his actions were meant to happen.[19]

Not long after, a group made up of ex-mutants, calling themselves X-Cell, who believed the government had depowered mutants, began operating in Mutant Town. Around this same time, Siryn and Monet returned from their brief trip to France, with an ex-mutant named Nicole, which shocked Layla because she didn't know of her arrival. After Quicksilver had restored most of X-Cell's mutant powers using his Terrigen Crystals, Layla paid him a visit. She revealed to Callisto and Marrow that it was he and Wanda Maximoff who caused M-Day, and Pietro had lied.[20]

Later in Central Park, Layla was ambushed by Nicole only to be saved by Quicksilver, who believed that he needed to kill her. After escaping Quicksilver, and having him arrested, Layla was tracked down again by Nicole. Layla tricked Nicole into falling in front of a train, which destroyed her, revealing she was actually an android.[21][22]

Around this time she was also offered a place among Nick Fury's Secret Warriors by Daisy Johnson but declined, claiming that with her they would fail, and the mutants would need her more.[23]

After the birth of the first mutant born since M-Day, Cyclops contacted X-Factor to request some favors.[24] Madrox and Layla were sent to Eagle Plaza in Dallas to meet with Forge to investigate new mutant populated possible futures. After the first dupe was sent into the time stream, the second dupe prepared to leave, but Layla jumped in with him and the pair was sent 80 years into the future.[25]

While there, they discovered that the mutants were living in internment camps.[26] In an internment camp, both Madrox and Layla were branded as mutants.[27] They learned from a young Bishop that the "mutant messiah" had caused this world, by killing a million humans. Layla then proceeded to kill the dupe to send the information back to the original Jamie, leaving her alone and stranded in the future.[9]

Despite being trapped in the future, Layla still interacted with Jamie as a figment of his imagination. This figment served as "stuff Jamie knew deep down", appearing in moments of self-realization, such as when Jamie admitted to himself that he knew about Siryn's pregnancy.[28]

Layla eventually escaped the camp and helped a new mutant called Linqon. Layla revealed to some people an apparently secret agenda called Operation Purity, which involved every citizen being tested for mutant genes, though this was untrue at the time Layla knew it would happen eventually and that by spreading this misinformation people would believe it was coming and she could make it happen quicker. Layla got a young man named Dwayne to drive her to Atlantic City and met up with Cyclops and his daughter Ruby. Together with Ruby, Dwayne and Linqon she helped initiate the Summers Rebellion which she had spread fear to help incite and that she knew had to happen.[10]

After years of trying, Layla found a way back to her present. Pretending to be a nun, she made arrangement to meet with Pastor John Maddox. When she arrived at John's church, she found Jamie about to kill himself. She stopped him and revealed who she really was, much to his shock.[29] She revealed herself to be a holographic projection and took Jamie into the alternate future.[30] When Layla and Jaime returned to the future, Jamie met Ruby, who berated Layla for traveling back in time when warned not to. The group was then attacked by Sentinels.[31] Once they were safely back in Atlantic City, Layla and Jamie argued about how they never came for one another, the two finally gave into their emotions and shared a kiss. Jamie was awkward about starting a relationship with Layla, feeling she was still a child, though Layla told him she never really was.[31]

The next morning, Cyclops briefed Madrox on the disappearance of certain members of the Summers Rebellion. To find out more about time-travel, Madrox, Layla and Ruby went to enlist the help of Doctor Doom, the resident time-travel expert.[32] Doom revealed he had previously met Layla, and explained the concept of a Doomlock, an individual or machine that could change the past without creating divergent timelines. They brought Doom back to Atlantic City to aid in solving the mystery, but Doom betrayed them by enslaving Cyclops and summoning Cortex to kill them all. Cortex quickly killed Trevor Fitzroy, and Layla was forced to reveal her real powers and revived Fitzroy by Ruby's request.[33]

After defeating Cortex, Anthony Falcone, and his Sentinels, both Layla and Madrox were sent back in time via Doctor Doom's Time Platform. Jamie arrived at XF Investigations Headquarters just a few days after he left, but Layla went even further back to arrive at Saint Joan's Orphanage just before she joined X-Factor to give her younger self information about the future.[33]

Back from the Future

Once she was back in the present, Layla traveled to Castle Doom in Doomstadt, Latveria, to speak with Doctor Doom. After explaining her knowledge of the future, Doom agreed to share some of his knowledge of science and magic in exchange for Layla's advice about the future. Layla stayed with Doom as an adviser for a year[34] until the disappearance of Invisible Woman brought X-Factor into direct confrontation with Doom.[35]

Layla next appeared at the Dublin Airport with Shatterstar to save Banshee from Trask's MRD.[36] After they escaped, the trio joined the rest of X-Factor back in New York City.[2] Once she was back with X-Factor, Layla was back to her old tricks of giving advice and steering others in certain directions. Layla still maintained an odd relationship with Madrox, including joking about marriage[37] and acting playful jealous.[38]

When her teammate, Strong Guy, was fatally wounded by an attack from Ballistique, Layla used her reanimation powers to bring him back to life, much to the astonishment of X-Factor and Doctor Castillo.[39] Later, Layla tearfully promised she'd find a way to return his soul.[40]

With the birth of Wolfsbane's child approaching, Layla began to prepare to defend the X-Factor Investigations Headquarters from being besieged by mystical forces. Despite having some disagreements with Rahne's return,[41][42] Layla seemed to have put a full effort into protecting her.[43]

Layla Miller is a mutant with a variety of former and active powers, including:

In addition to her mutant powers, Layla has acquired:

Like this? Let us know!
Retrieved from "https://marvel.fandom.com/wiki/Layla_Miller_(Earth-616)?oldid=6131734"
Community content is available under CC-BY-SA unless otherwise noted.