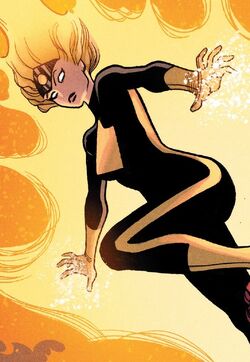 Laynia Sergeievna Petrovna (Russian: Ланья Сергеевна Петровна (Крылова); Belarusian: Ланья Сергеевна Петровна (Крылова)), known as Darkstar (Russian: Тёмная Звезда), was part of a Soviet super team recruited to bring the Black Widow back to the USSR.[2] Instead, she switched sides and joined the Black Widow's then-current team, the Champions of Los Angeles, remaining with the team until it disbanded.[3]

While a member of the Champions, she and Bobby Drake, the former X-Man known as Iceman, came close to entering into a romantic relationship, but Laynia liked Iceman as a friend, and not as a love interest.[4] Darkstar quit the Champions and returned to Russia, leaving behind a devastated Iceman.[5]

Darkstar joined the Soviet Super-Soldiers alongside her over-protective brother, Vanguard.[6]

The former Soviet Super-Soldiers eventually defected to the United States but were captured and returned to the Soviet Union, beaten into a coma by their replacements, the Supreme Soviets.[7]

They were rescued and revived by a man known as Blind Faith and his team called the Siberforce whom she joined.[8]

Later, when the People's Protectorate was rechristened the Winter Guard, Darkstar was recruited into the team.[9]

Darkstar eventually joined the X-Corporation office in Paris, France. She perished while fighting creations of the Weapon Plus program in the Channel Tunnel between France and England. She was possessed by Weapon XII, and Fantomex was forced to kill her.[10] A funeral was held in her honor at Père Lachaise Cemetery in Paris, where she was buried.[11]

Darkstar, along with many other deceased mutants, was resurrected by Selene and Eli Bard with the Transmode Virus, but was later returned to rest with Selene's defeat.

Following her death, a gem capable of reproducing her powers and imbued with a measure of her essence was used by the Russian government to imbue specially selected agents with the powers and alias of Darkstar. First among them was Sasha Roerich, who served briefly with the Winter Guard against the Lady Liberators,[12] Skrulls,[13] and the chaos waves created by Chthon[14] before sacrificing herself to destroy a mutated Igor Drenkov.[1] Her successor, Reena Stancioff was the first to experience flashes of Laynia's personality, and served with the Winter Guard against the Remont 6,[1] King Hyperion,[15] and invading Atlanteans led by Krang[16] before dying in battle with Fantasma and her Dire Wraith brood.

After being killed by one of the Wraiths, the entity took the form of Laynia and took possession of the gem, allowing it to possess her powers. Attempting to unleash the Darkforce powers on the Winter Guard and their allies the Protectorate, the Wraith was overwhelmed by Laynia's personality, resulting in a seemingly reborn Laynia, allowing the Guard and Protectorate to rally and defeat Fantasma and her ally, the Presence; she proceeded to join the remaining members of the teams as they escaped the exploding base that had served as a Dire Wraith hive.[17]

When she and the Winter Guard tried to capture the Intelligencia, the group used the Zero Cannon on them, sending the team to space, but they still survived.[18]

Darkforce Manipulation: Darkstar had the ability to tap into and manipulate an intense black form of extradimensional energy called the Darkforce. This energy, which appears to be related to the extradimensional black gas-like substance manipulated by Shroud and Cloak, possesses mass and form (whereas Cloak’s and Shroud’s does not). It may be that it is the same substance and that Darkstar simply knows how to manipulate it to greater effect than the other two. Her power seems analogous to that of Blackout.

Multilingual: Laynia is fluent in both her native Russian and English.

Skilled Combatant: Darkstar was trained in combat by the KGB.

Darkstar possessed the normal human strength of a woman of her age, height, and build who engaged in intensive regular exercise

Like this? Let us know!
Retrieved from "https://marvel.fandom.com/wiki/Laynia_Petrovna_(Earth-616)?oldid=6440691"
Community content is available under CC-BY-SA unless otherwise noted.