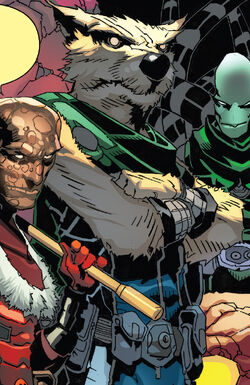 Le Loup Qui Pétrifies was a wolf allegedly born in the 19th century that got bitten by a cursed human and was remade as the Night Wolf: sometimes being a "normal guy, sometimes a full wolf guy".[2] At some point, he became the leader of the Honor Guard of the Monster King of Staten Island.[1]

After returning from one of their missions, they discovered Deadpool had killed their king and become the new monarch according to ancient Monster Law. Although understandably hesitant at first, the entire team eventually accepted Deadpool as their new leader and helped him defeat Kraven the Hunter as he hunted for him.[3]

Night Wolf has since been helping Deadpool in all things monster-related and is often left in charge whenever Deadpool leaves the island.[4]

Like this? Let us know!
Retrieved from "https://marvel.fandom.com/wiki/Le_Loup_Qui_Pétrifies_(Earth-616)?oldid=6462090"
Community content is available under CC-BY-SA unless otherwise noted.