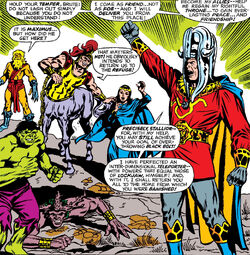 Maximus allied with six Inhuman criminals, sentenced for their treachery and subversive acts. Freeing Falcona, Aireo, Stallior, Nebulo, Leonus, and Timberius from their place of imprisonment with the Hulk's aid, Maximus then tricked the Hulk into breaching the protective barrier guarding a forbidden chemical substance created by the Inhuman scientist Romnar centuries previous. This substance had certain highly unstable energy absorbing capacities and Maximus intended to use it to usurp the throne again. Black Bolt overpowered him before he could do so.[1]

Maximus succeeded in bringing about his second coup some months later. Drugging the Royal Family with will-deadening "hypno-potions," Maximus wrested the crown from Black Bolt and had the Royal Family imprisoned.[2]Before he could activate his Hypno-Gun, which he believed would make all mankind surrender to his will, the Royal Family escaped and subdued him. Maximus' first coup had lasted several years; his second one several days.[3]

Escaping Attilan with his band of renegades in a rocket, Maximus landed in the South American country of Costa Salvador, and attempted to build a will-deadening device similar to his Hypno-Gun.[4] His plans were opposed by the Hulk and the United States Army. [5] However, and he and his allies were forced to flee again.[6]

The Silver Surfer finds himself attacked by the evil Inhumans led by Maximus, who succeeded in making the Surfer believe that the Inhumans as a whole are responsible for the attack.[7]

Later Leonus, Falcona and Stallior were brainwashed by Maximus into being members of the Crimson Cadre who were also under his thrall at this time.[8]

Retrieved from "https://marvel.fandom.com/wiki/League_of_Evil_Inhumans_(Earth-616)?oldid=5548376"
Community content is available under CC-BY-SA unless otherwise noted.