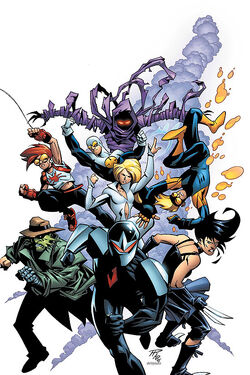 Origin
Banded together by chance to battle a time-travelling villain who had killed all the other superheroes in their time.

The time-travelling villain Chronok travelled with his army to present-day Earth and used his extensive knowledge of Earth's Greatest Heroes to hunt them down and wipe them out. The only ones who managed to survive were those few obscure heroes who had not done enough to appear in the historical records Chronok used. Speedball managed to steal Chronok's time-travelling device, and the team travelled to the future, just prior to Chronok's theft of the device from Gravity/Reed Richards' secret base, and prevented him from stealing it.

In doing so, they created a divergent timeline in which they stayed in the future, while their Earth-2992 counterparts all lived on because of their heroism. Notably, this divergent reality established romantic relationships between Chris Powell (Darkhawk) and Tandy Bowen (Dagger), as well as Greg Willis (Gravity) and Laura Kinney (X-23).[2]

Retrieved from "https://marvel.fandom.com/wiki/League_of_Losers_(Earth-6215)?oldid=5676722"
Community content is available under CC-BY-SA unless otherwise noted.