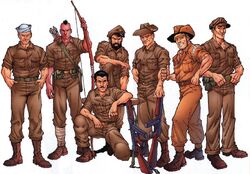 Captain Simon Savage, a navy submarine commander, was transferred to the Marines during World War II. Savage was said to have modeled his unit on the Howling Commandos. The Leatherneck Raiders specialized in fighting the Japanese, although at least once they teamed up with the Japanese Samurai Squadron to fight Baron Strucker and Hydra.

Although the Leatherneck Raiders (also known as the "Battlefield Raiders") were an effective fighting force in World War II, they never achieved the recognition that the Howling Commandos received.

Retrieved from "https://marvel.fandom.com/wiki/Leatherneck_Raiders_(Earth-616)?oldid=5640765"
Community content is available under CC-BY-SA unless otherwise noted.