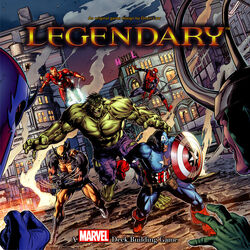 The heroes cooperatively try to stop a villain in the Marvel Universe from completing a scheme. There are a total of 8 different schemes in the base game. A player may either choose a scheme or randomly draw a card.

"Legendary" is a deck building game based on the Marvel Universe published by The Upper Deck Company. It was designed by Devin Low with Jason Brenner, Bubby Johanson, Crystal Lautzenheiser, Nick Leslie, and Mark Shaunessy on the development team. The game can be played with 1-5 players and can be different each time the game is played.

Overview
In the game each player takes the roll of a S.H.I.E.L.D. agents recruiting heroes and fighting villains. A villain deck is created based on an over-arching mastermind and the scheme the mastermind is trying to complete. Players chose heroes to combine into a hero deck or add them at random. These heroes will be available for recruitment and used can be used to fight the mastermind and his villains. The players win the game if they defeat the mastermind 4 times. The players lose when the scheme's "Evil Wins" conditions are met. If either the Villain deck or the Hero deck run out of cards, and the players cannot successfully finish the Mastermind by the end of that turn, the game is a draw.

Set-up
Villain Deck - To set up the villain deck players first choose a scheme and a mastermind. Each mastermind always leads a certain group of villains (for example Magneto always leads the Brotherhood). Schemes may have specific instructions on how to build the villain deck. Follow these instructions and include the correct number of villain and henchmen cards shown on the game board.


HQ Deck - Based on the number of players set-up the HQ deck by combining sets of 3-6 hero cards, the number of hero sets required is displayed on the game board. Note: Each hero is represented by a set of 14 cards, 1 rare, 3 uncommons, and 5 of each type of common.


Player decks - Each player assembles a 12 card deck of S.H.I.E.L.D. Agents and Troopers, making a deck of 8 Agents and 4 Troopers.


Shuffle all the decks and have each player draw 6 cards from their Player deck. Reveal the top 5 cards of the HQ deck on top of the HQ, these will be the current heroes available for recruitment.


Gameplay
When a player's turn starts, they play the top card of the villain deck. This can introduce a new villain to the city, which will cause another one to escape if the city is already full of villains. It could also be a Scheme Twist, advancing the mastermind's scheme. It could also be a Master Strike, representing the mastermind attacking the heroes more directly. Finally, the villain closest to the Villain Deck could capture a bystander, making a more honorable target to attack or a more debilitating loss should it escape with the bystander.
The player may then play the cards in their hand in any order to gain recruitment ability to recruit more heroes, or attack power to combat the villains. Many cards will have abilities that trigger if certain other cards are played, usually similar to itself (for example, some Hulk cards get more powerful if you played another card based on strength). The player may recruit heroes or defeat villains between or after any of these plays. Recruited heroes go the player's discard pile, to be drawn & used later in the game. Villains will often have an effect that trigger when they are fought, such as KO'ing one of your heroes or wounding other players. If the player attacked the mastermind, they get a Mastermind Tactic that is usually helpful in the base game, but often makes the game harder if it is from an expansion. Cards

Retrieved from "https://marvel.fandom.com/wiki/Legendary:_A_Marvel_Deck_Building_Game?oldid=5266657"
Community content is available under CC-BY-SA unless otherwise noted.