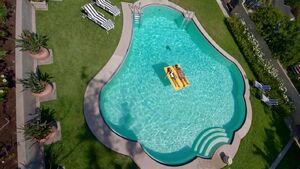 Ptonomy and Clark find David more than a year after his disappearance, and bring him back to Division 3 Headquarters. In the time he's been gone, Melanie and the Summerland mutants joined Division 3, and convinced their leader, the mysterious Admiral Fukyama, to stop considering mutants a threat. Now they only track down the truly dangerous mutants like the Shadow King and Oliver, who are connected to a series of psychic attacks on crowds of innocent people. For David, however, no time has passed at all. As he reconnects with Syd and the rest, David soon realizes Division 3 does not believe he is telling them the truth. Ptonomy and Clark briefly found David some time before at a night club the Shadow King and Oliver attacked.

Cary has David get inside a device to enhance his psychic powers so he can use them to locate Oliver and the Shadow King. He finds them in the Astral Plane, in the projection of a night club. David battles Oliver and the Shadow King in the form of a dance battle, but is overwhelmed by their psychic powers. Syd finds him naked in the middle of a hallway, as if he was suddenly teleported out of Cary's machine.

David's memory comes back to him in his dreams. After his abduction, he encounters a version of Syd from the future. She gave him a cryptic message about helping the Shadow King find his original body before it's too late. When David wakes up, he again finds Oliver and the Shadow King in the Astral Plane.

Retrieved from "https://marvel.fandom.com/wiki/Legion_(TV_series)_Season_2_1?oldid=5388720"
Community content is available under CC-BY-SA unless otherwise noted.