The greatest monsters are the ones in human clothes.... How does he turn? I don't know. All I know is he does; into something magnificent, something terrible. Legion. The world killer.

Syd finds a giant, pink tub stopper in the middle of the desert next to a giant, seemingly bottomless pit. A rabbit is suddenly throw out of the pit. Syd pulls a large hook out of the rabbit's skin, only for the hook to pull her down into the pit. David wakes up moments later, only to have no idea what happened to Syd. At the bottom of the pit, Syd is confronted by Melanie, who tries to persuade her to turn on David by showing her his true self, his insanity. David, meanwhile, enters the abandoned monastery and finds Farouk/Oliver waiting for him inside. When he refuses to tell David what he did to Syd, David enters Farouk's mind and brutally tortures him in the astral plane. Melanie shows Syd images of David torturing Farouk/Oliver to further convince her of David's dark side. She then tries to convince Syd that David is the danger her counterpart from the future is trying to prevent; that in the future he becomes "Legion, the World Killer." Oliver eventually passes out from the pain. Before he loses consciousness, he warns David that Farouk was never with them, but with Syd and Melanie. With Syd convinced of David's future as a monster, Farouk (in Melanie's body) unleashes the Minotaur inside her mind, and then transfers himself into his original body.

Arriving in the desert, Lenny grabs the weapon - a sniper rifle - out of the car before it's engulfed in flames. She finds a group of men with metal boxes on their heads sitting around the pit. The point her in the direction of the monastery. Kerry, Cary and a squad of Division 3 commandos arrive some time later, having followed the tracking device Cary put in the car. They're confronted by the men Lenny came across earlier, only now without the metal boxes over their heads. The men start twirling a weapon that emits a high-pitched sound that incapacitates Cary and the squad. Kerry, however, fights through the pain, and takes these men on herself. Lenny snipes the last two from a distance. One of their weapons wraps around Cary, and one of the men drags him down to the bottom of the pit. They soon come across the Minotaur. Cary runs away while the Minotaur kills the other man, eventually running into David and Oliver's unconscious body.

Kerry jumps down into the pit to find Cary, but finds Syd instead. Syd tells her about David's future when they're interrupted by the Minotaur. They fight the Minotaur together, but the monster from Melanie's mind overpowers them and pins Syd to the ground. Meanwhile, Farouk resurfaces and comes across Clark and a team from Division 3 with a device designed to hamper his and David's psychic powers. Farouk quickly puts them to sleep, rips the weapon out of the ground, and sends it hurling towards the horizon. Farouk enjoys the first sunrise he's felt in his own body in decades when David suddenly appears at his side. 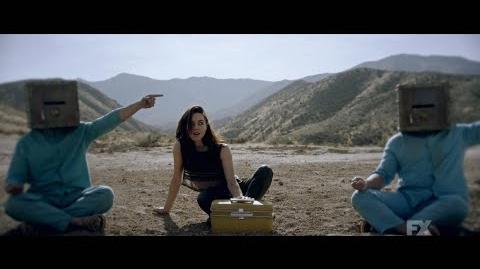 Retrieved from "https://marvel.fandom.com/wiki/Legion_(TV_series)_Season_2_10?oldid=4766860"
Community content is available under CC-BY-SA unless otherwise noted.