In the past, monks of the Mi-Go order bury Amahl Farouk's body deep under their monastery.

In the present day, Ptonomy is infected with the chattering condition while he sleeps. Cary tries to teach Kerry many of the biological necessities of everyday life should she ever again find herself unable to go back inside his body. David and Syd discover the Monk is loose in Division 3's headquarters. David communicates with Farouk on the Astral Plane so he could help him find the Monk. Farouk can't help him, but warns David that the Monk is responsible for the chattering condition Division 3 believed he is responsible for.

The Monk has infected most of Division 3 with the condition by the time David returns to the physical world. David finds Cary uninfected, and Cary explains what happened while David was in the Astral Plane. They find Ptonomy paralyzed by the condition, and enter his mind in an attempt to rescue him. They find Ptonomy mindlessly gardening, forgetting his place with every flower he cuts. Cary theorizes the condition traps people in a fantasy within their own minds. For Ptonomy, whose mutant abilities prevent him from ever forgetting everything, his fantasy is to constantly forget. David frees Ptonomy from the condition, which also makes him unable to be reinfected.

The three of them then find Melanie paralyzed in a hallway. They enter her mind to free her, but they find themselves in a dark room presented with a text adventure game. They quickly lose the game, and are chased by a minotaur in a dog's wheelchair. David frees Melanie when he writes a short story to lure her out of hiding. Back in the physical world, David splits-off from the rest so he can find Syd while they look for Admiral Fukyama. Cary hurries after David, only to see him ambushed and dragged away by children under the Monk's sway. They take David to the room holding the previous victims of the chattering condition, and the Monk makes David relieve his memories. Cary finds Kerry infected with the condition, and enters her body to hide from the Monk's child soldiers.

Melanie and Ptonomy find the Monk in Admiral Fukyama's office. The Monk is hooked into the admiral, and speaks to Melanie and Ptonomy through the Vermillions. He demands they hand over "the weapon" to destroy the Shadow King, as the monks of his order took him in long ago without realizing he was a monster. Melanie thinks "the weapon" is David, but the Monk accuses David of working with the Shadow King. David teleports himself and the Monk to the roof of the building. David demands he reveal the location of the monastery where the Shadow King's body is buried. The Monk refuses to give up the location of the monastery, and commits suicide by falling over the edge of the building to protect its location from David's psychic powers. David turns around and finds Syd right behind him, but stricken with the chattering condition. He enters her mind to rescue her. 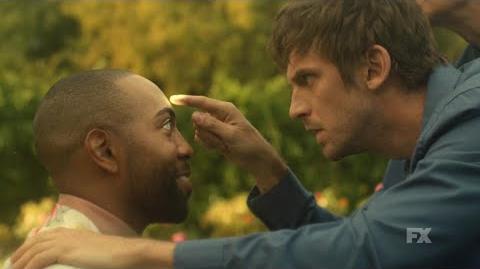 Like this? Let us know!
Retrieved from "https://marvel.fandom.com/wiki/Legion_(TV_series)_Season_2_3?oldid=6497483"
Community content is available under CC-BY-SA unless otherwise noted.