Division 3 has Lenny Busker locked up in isolation since her sudden return. Clark attempts to interrogate her, asking about the Shadow King's plan and how she returned, but Lenny gets distracted by memories of her grandmother giving her vodka from a soda can. Without making any progress, he leaves her with one last question - whose body is she in?

Ptonomy tries to get information out of her later, but to similar results. He tries to read her memories to get the information he needs. As he tries to probe her mind, he's confronted with a vision of Admiral Fukyama as a monster which cause Ptonomy to reflexively assault her. He leaves in a hurry once he comes to his senses.

David asks Lenny about the Shadow King's plans some time later. He gets more out of her than Clark or Ptonomy, but he doesn't know if he can trust what she tells him. When David probes her mind to find the truth, he's confronted with a memory of himself and his sister Amy as children. He again looks into her mind to see just whose body she's in.

Some time earlier, Oliver and Farouk exhume Lenny's original body from where it was buried in the desert. Farouk places a tissue sample from her corpse inside a device he and Oliver stole from Division 3 headquarters. They then find Amy Haller's husband Ben at a dig site somewhere else in the desert. While they observe Ben from a distance, Farouk asks Oliver if he has a moral problem with what they are about to do. Oliver says he does not, but promises Farouk that he will kill him in the future. They follow Ben back to his home, where he and Amy are under the protection of Divison 3. Amy notices Division 3's guards have disappeared as Ben tells her about a sense of dread he feels. Ben answers a knock at the door, and when he doesn't come back Amy finds a pile of dust at the door. She turns around to find Oliver in her kitchen. Oliver psychically attacks her, and then uses the device on her to implant Lenny Busker into her body. Oliver and Farouk leave the reborn Lenny behind in the desert so she can be picked up by more of Division 3's forces.

David, left an emotional wreck by what he saw, swears he's coming for the Shadow King. 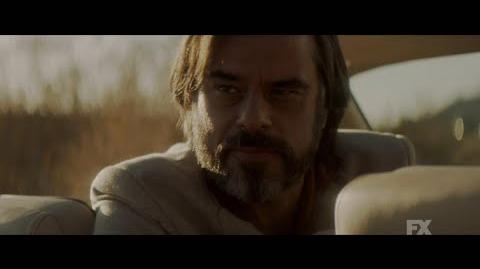 Like this? Let us know!
Retrieved from "https://marvel.fandom.com/wiki/Legion_(TV_series)_Season_2_5?oldid=6497485"
Community content is available under CC-BY-SA unless otherwise noted.