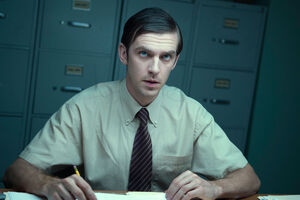 David has a mental breakdown after learning the horrible truth of what the Shadow King did to Amy. He imagines multiple alternative timelines for himself, all seemingly happening at the same time.

In one reality, David is a homeless man wandering the streets and muttering angrily to himself. One night, he is attacked by a gang of youths who savegly beat him, causing his powers to flare up, reducing the young men to dust. The flare-up of his abilities attracts the attention of Division 3, who send an armed squad to apprehend him. David kills the first wave of soldiers, and while harnessing his strength to deal with the rest, he is abruptly sliced in half by Kerry.

In another reality, David is under heavy medication which keeps him dull and docile, and is cared for by his sister. David works at a packaging company and is constantly reminded by his sister to take his medications, despite being apprehensive due them making it hard for him to think. One night, while waiting to be picked up by his sister, the meds seemingly start to wear off and David begins to see the Devil with the Yellow Eyes. He becomes increasingly upset and starts yelling to himself, drawing the attention of a pair of police officers. The officers, triggered by his behaviour try to apprehend David, who is becoming increasingly terrified. Amy arrives just as David is being arrested, and when one of the officers pushes her, David loses control of his powers and kills them. Several squad cars arrive, and an officer shoots David in the back, just before he obliterates all of them. Years later, David is now an old man and is still cared for by his sister. The gunshot left him crippled and he is now completely dependant on his sister, unable to even speak.

In one reality David lives a happy life in a large house together with his wife and two children. In another he is an office drone who hallucinates that a mouse is singing to him. In one, he is a drug addict, explaining the multi-verse theory to a friend while eating at a diner. In another David succeeds in hanging himself, and his grave is visited by Amy.

In another reality, David is a coffe-boy at a large corporation. He uses his powers to learn that his boss is about to be duped into making a horrible business decision. He warns her and gains her trust. Years later, David is now the richest man in the world. His old boss is his secretary and his sister comes to ask him to buy her another house. David uses his powers to hurt her, telling her that there will be no more houses. At some point, this version of David lost his battle to the Shadow King, who is now in full possession of David's body and is planning to use his riches to fulfill his personal ambitions.

David snaps out of his fantasies after rembering the day when Amy took him to Clockworks Hospital. He declares that he is going to kill the Shadow King. 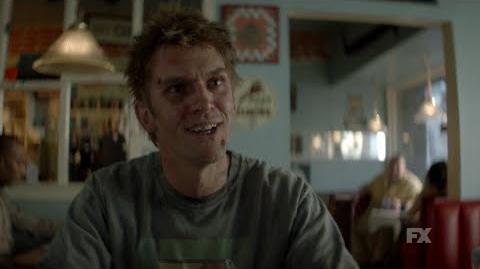 Like this? Let us know!
Retrieved from "https://marvel.fandom.com/wiki/Legion_(TV_series)_Season_2_6?oldid=6497486"
Community content is available under CC-BY-SA unless otherwise noted.