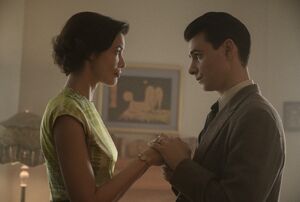 David and Switch enter the time stream to communicate with David's parents, but soon find they are only able to observe them at different points in the past. While David's mother Gabrielle is a human, his father Charles is a powerful psychic mutant like his son. In one time frame, David sees where David and Gabrielle first meet and fall in love at a psychiatric hospital. They leave the hospital together and soon start a family. In another, Charles leaves Gabrielle and the still-infant David when he finds another psychic like himself in Morocco - Amahl Farouk. While Charles is gone, Gabrielle often wonders to herself if David will grow up to be like herself or a man like his father.

David notices Farouk's shadow creeping throughout his childhood home. He tries to warn his mother about the monster in her home, but the infant David's own latent psychic abilities are able to protect him from Farouk. Gabrielle's mental state continues to deteriorate the longer Charles is away from her. She is eventually able to hear David's attempts to communicate with her, only furthering her mental illness. One night, after already suffering from a schizophrenic attack, Gabrielle sees the half-formed apparition of the present-day David appear at her child's crib, causing her to faint. Charles suddenly arrives home and psychically blasts away the apparition - unaware of its true identity - sending David and Switch back into the time stream. Having over-extended her powers, Switch passes out from exhaustion before she can take David back to his past. In Charles and Gabrielle's home, Charles fruitlessly tries to get Gabrielle to regain consciousness. While Charles is distracted, Farouk possesses the infant David Haller.

Like this? Let us know!
Retrieved from "https://marvel.fandom.com/wiki/Legion_(TV_series)_Season_3_3?oldid=6497492"
Community content is available under CC-BY-SA unless otherwise noted.