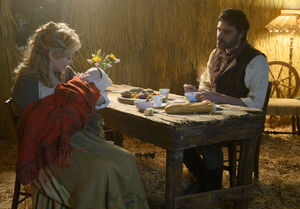 Remember: It's not us or them. It's us and them.

Oliver, Melanie and Sydney move into the city as the Wolf gets more powerful. Sydney runs into Cynthia, now a member of the Wolf's cult, and discovers the Wolf has followed them to the city as well. Cynthia tries to get Sydney to join the Wolf's cult. Oliver, Melanie and Sydney rescue Cynthia from the cult by abducting her in the night, but the Wolf tracks her down. Oliver puts on his modern clothes and engages the Wolf in a rap battle to defend Cynthia. Even though Oliver wins the rap battle, Cynthia still willing chooses to leave with the Wolf. Oliver returns to Syd and Melanie, and Melanie drops the act when Oliver puts her back in her modern dress. Syd realizes she has to go back to the real world with the lessons Oliver and Melanie have taught her.

Syd wakes up in the real world, still on Division 3's airship roughly twenty minutes after she lost consciousness. She finds Kerry, Cary and the still-open time door. Cary makes more of the bracelets that allow David to enter the three of them can follow him. Kerry is too badly wounded from her fight with David and his followers to help them, so Cary absorbs her back into his body, transferring her wounds onto him. Cary is forced to use a wheelchair while a fully-healed Kerry re-emerges from his body. Syd, Kerry and Cary enter the time stream before they are surrounded by Time Eaters.

Retrieved from "https://marvel.fandom.com/wiki/Legion_(TV_series)_Season_3_6?oldid=5636625"
Community content is available under CC-BY-SA unless otherwise noted.